WE Metaverse will have the first Loki NFT avatar whitelist campaign

WE Metaverse will have the first Loki NFT avatar whitelist campaign 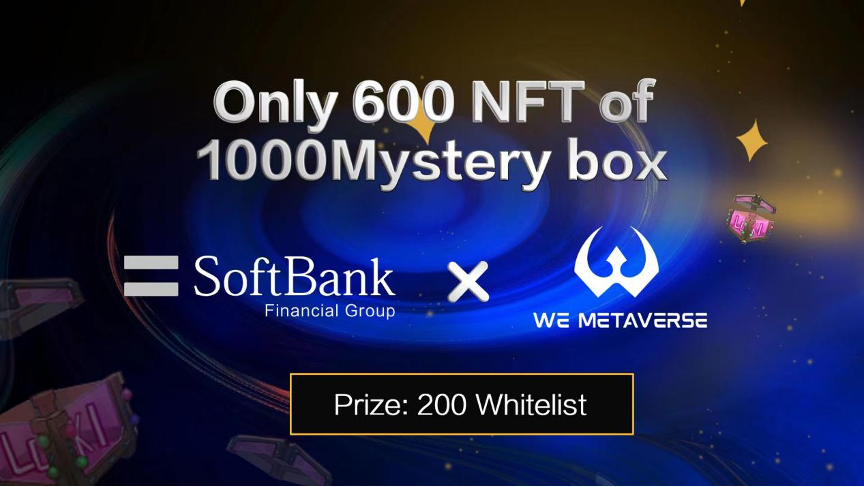 WE Metaverse, the first large-scale BSC-based public chain led by SoftBank Capital, announced that it would launch a Loki NFT whitelist, its first high-profile campaign for the NFT global market, which is eligible to open blind boxes. The 5,000 mystery boxes will only have 1,000 NFT heads, and they will be released in three rounds. There are 500 NFTs that will be released in the first round. An additional 300 NFTs will be released in the second round. A third and final round will be comprised of 200 NFTs.

The Loki NFT is divided into six levels (Lv1-Lv6) and can be exchanged for the game character NFT. The total value will exceed $134,000. The users who participate in the first round of the mystery box activity have the highest probability of obtaining the Loki NFT. And the users who do not get the NFT avatar in the first round can retain the whitelist qualification to participate in the next mystery box activity for free.

Loki NFT has a wide range of application scenarios in WE Metaverse.

For example, the character NFT can be exchanged in the game, it's used for the Dao organization in the WE ecosystem as the right to vote, the pledge is made in the corresponding agreement to obtain the airdrop of the new WE ecological project, etc. These are the ecological functions of the Loki NFT avatars.

To participate in this whitelist event, the instructions are as follows:
1. Follow WE Metaverse's official Twitter account and like the event tweets.
2. Forward the tweet and @ three friends.
3. Enter the official Telegram group and send your BSC address to the customer service.

The lines between virtual worlds and reality are increasingly blurred, and behind this is a series of identities, cultures, and communities that provide intangible social value. For many, Loki NFTs are more important than a Rolex, and on the Internet, our digital identity is shown to the world 24/7.

According to 2021 Google Trends data, users search for NFTs more than any specific cryptocurrency. Its sales are staggeringly high, surpassing $25 billion in 2021 compared to $340 million in 2020; therefore, the increase is about 73 times. Data from Messari shows that the secondary market for NFTs, including December, reached a size of $15 billion. Cryptoslate estimates that the current market cap of NFTs is $37.65 billion.

Crazy events about NFTs can be seen everywhere, and SNL has performed scenes about NFTs at least twice. Just after the 2022 Super Bowl halftime show ended, Snoop Dogg released his own NFT. Popular NFTs have been included in celebrity art collection lists. This series of events has put NFT and other encrypted assets in the mainstream spotlight again.

WE Metaverse believes that the avatar of social media is a showcase and has the most direct social attributes. The avatar-type NFT will also set off the second wave in the world. WE Metaverse is inspired by Loki, the mascot that is loved by users and invites many well-known painters and illustrators around the world to create secondary creations. In order to allow all fans to participate, WE Metaverse will start a blind box draw event at a later stage.

WE Metaverse is the first complete 3D mode chain game equipped on BSC built by the WE team. WE Metaverse integrates multiple modes and gameplay, including GameFi, Defi, SocialFi, NFT, and DAO, aiming to create a rich and immersive game experience for players.

The core of WE Metaverse is still "Play to Earn." However, unlike the market focusing only on "Earn" also known as the "Gold-hitting mode" lacking the "Play" experience, the WE Metaverse game team not only presents its users with exquisite and vivid game characters, an entire virtual 3D mode game scene but it will also implement the "Play" in "Play to Earn.". In addition, the real-world users are familiar with the international stars, top brands, and all kinds of real-world concerts and film festivals, which will successively appear in the WE Metaverse.

In addition, due to the MMORPG game attributes of WE Metaverse, it brings a solid methodological and social experience. Players can freely switch game characters to get different situational social interactions in different situations while gaining additional benefits.

The avatar NFT project is one of the most successful projects in NFT history. In 2017, the algorithm generated 10,000 CryptoPunk NFTs and was given free to any interested party with an ETH wallet. Fast forward to 2021, the cheapest of the 10,000 is worth over $400,000 and more than $4 billion in NFT series deals. In today's WE Metaverse Loki NFT, with its scarcity, transferability, and proof of ownership, gamers can see their in-game purchases as a future return on a potential investment, rather than just an exciting addition to regular games.

However, other categories like sports, fashion, and physical assets are latecomers. Big players from Meta (formerly Facebook) to Twitter to Reddit to Visa are also noting and working to ensure they don't miss the NFT boom. Potential future NFT applications are almost endless.

From the present, the perspective of the universe's development needs a set of independent economic systems. The system needs to have good circulation, stable security, and legal compliance, and in recent years NFTs have shown such a possibility. NFTs confirm the status of virtual wealth, efficient circulation, and the creation of a virtual world. As WE Metaverse matures and its influence expands, its perceived value and price