Global athletic leader New Balance and PROGRAM 15, the premier baseball player development and training system, are continuing their commitment to Developing The Stars of Tomorrow with two-year extension for the Future Stars Series. 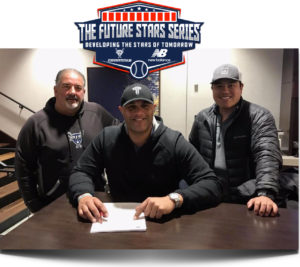 Launched in the fall of 2016, The Future Stars Series began as a grassroots initiative between New Balance and PROGRAM 15 to elevate the game of baseball by providing amateur baseball players across all economic levels an opportunity to reach their full potential through the training, development, and guidance of former MLB players, scouts, and coaches.

New Balance has strengthened their commitment to providing the most comprehensive amateur baseball player identification and development experience available by securing a two-year extension with PROGRAM 15 as the Official Global Grassroots Player Identification and Development Program for New Balance Baseball.

PROGRAM 15 Founder, CEO and President of Baseball Operations for The New Balance Baseball Future Stars Series, Jeremy Booth, says, “I couldn’t be happier to extend the relationship with New Balance and the family they have created. We have had a ton of synergy from the start in our vision and our goals. New Balance has tasked us to lead their Global Grassroots Initiatives, and the designation of Global Player Identification and development group is a distinction we are honored to hold”.

The New Balance Future Stars Series has experienced exponential growth since its inception. News of the grassroots effort to reach as many undiscovered players as possible spread quickly and grabbed the attention of over 100 of the most respected organizations in amateur baseball who have come on board as PROGRAM 15 / Future Stars Series Regional Directors and Partners.

ABOUT PROGRAM 15:
PROGRAM 15 boasts a faculty and staff that includes multiple Major League All-Stars and World Series veterans responsible for executing the New Balance Baseball Future Stars Series, an initiative between the two organizations to elevate the game of baseball by providing amateur players across all economic levels an opportunity to reach their full potential through the training, development, and guidance of former MLB players, scouts, and coaches. For more information on Program15 and the Future Stars Series, visit www.futurestarsseries.com or @program15bb and @ftrstarsseries on twitter.

ABOUT NEW BALANCE:
New Balance, headquartered in Boston, MA has the following mission: Demonstrating responsible leadership, we build global brands that athletes are proud to wear, associates are proud to create and communities are proud to host. New Balance is the only major company to make or assemble more than 4 million pairs of athletic footwear per year in the USA, which represents a limited portion of our US sales. Where the domestic value is at least 70%, we label our shoes Made in the USA. New Balance owns five factories in New England and one in Flimby, U.K. New Balance employs more than 5,000 associates around the globe, and in 2015 reported worldwide sales of $3.72 billion. To learn more about New Balance, please visit www.newbalance.com and for the latest press information please visit http://newbalance.newsmarket.com. Keep up-to-date with all of the latest New Balance news on Twitter @NewBalance and newbalance on Facebook.