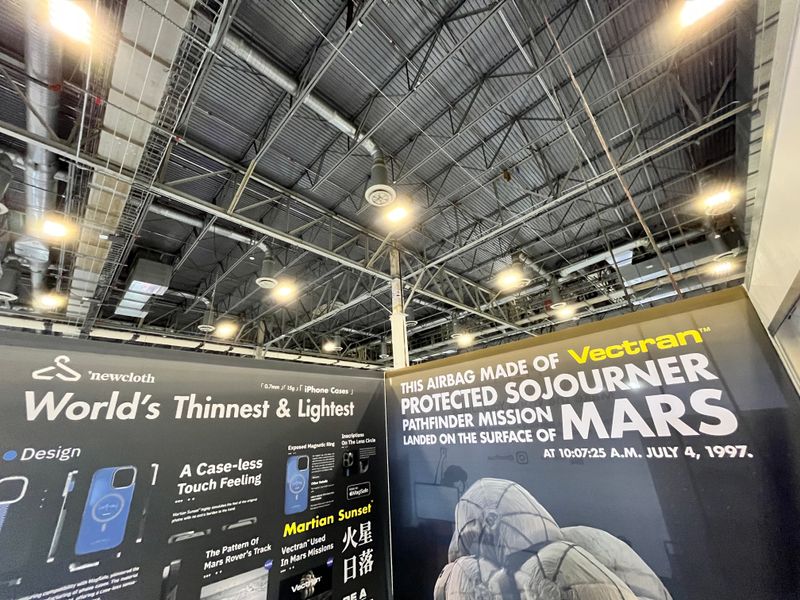 The 13 mini phone case weighs 11.6 grams, only half the weight of similar products, further reducing the burden of your wrist. It uses an aviation aluminum lens circle and the original module MagSafe, priced at USD 99 / RMB 699.

The Egyptian Blue special edition Vectran™ phone case is designed in dual colors, the inside surface is braided with blue Vectran™ HT fiber and the outside surface in black. On the right side, the glass-ceramic of the mobile phone screen is used to create the light-sensing newcloth logo. This version covers the iPhone 14 and 13 series of Pro and Pro Max models, priced at USD 129 / RMB 899.

newcloth released the ZPX-001 Martian Sunset™ phone case globally on December 1 last year. Made from Vectran™ fiber, the airbag material that protected the successful landing of the rover in NASA's 1997 Mars Pathfinder mission, the product breaks through the thinness limit of a phone case with MagSafe features, only 15g and 0.75mm, raising the world record by 13%. The original magnet-exposed design increases the magnetic force by 62.5% compared to the Apple original case. This is the world's first mobile phone case made of spacesuit fiber, leading the traditional category of mobile phone cases to a new era of material sciences. On the first day of sales, the RMB 1099 commemorative edition was sold out, and one month after the product launches, sales ranked Top 3 of high-end mobile phone cases in China market, surpassing traditional light luxury brands such as RIMOWA.

Before newcloth intervened, the global mobile phone case market was only competing in appearance and pattern, while materials stayed in silicone, metal and TPU for many years, and the American market was occupied by traditional anti-fall brands such as OtterBox and UAG for years. On the other hand, since 2021, brands such as CASETiFY and PITAKA have emerged, and the high-end mobile phone case market of USD 69+ (RMB 400+) has directly increased from 0 to outbreak. However, the existing players are still using traditional materials and innovating only in patterns. Instead of participating in the competition at the pattern level, newcloth upgrades the battlefield to new materials and new structures.

The starting point of newcloth's design is to think about what has changed in the iPhone itself, and what kind of phone case users need based on those changes. Since iPhone 13 series, the strength of glass has increased 4 times, and the phone is no longer fragile, while the heat and weight have skyrocketed. Users no longer need heavy drop-resistant phone case, but extreme thinness and reasonable protection, just like people will not wearing hiking boots 365 days because of outdoor camping twice a year. newcloth gets this insight and dropped the weight of the phone case from 50 grams of the regular brand to 15 grams, making the elbow no longer sore.

The vision of newcloth is not to be a leading phone case manufacturer but to evolve the necessities that accompany your everyday cyber life. The product philosophy of newcloth is that the products accompany you every day must not be fragile or bluffing, nor exaggerate or disguise. A good product relieves you, not distracts you. Every design should make sense. Product definer is the soul of the company not CMO.

Affected by the Covid-19 epidemic, CES 2021 opened online and CES 2022 was held in a combination of online and offline mode. According to the latest statistics, the scale of CES in 2023 has increased by 70%. At CES, in addition to many OEM mobile phone case manufacturers, there is another brand, Elementcase from San Carlos, California, whose products focus on metal frame, founded by off-road motorcycle enthusiast Jeff Sasaki. newcloth and Elementcase are among the few phone case brands at CES pricing more than USD 100.

While releasing new products during the CES, newcloth published the product and business thinking series v-log "Join the world again" on social media such as YouTube and TikTok. As a high-end consumer electronics brand, the company's attitude towards the world is “Be a VOICE, not an echo.” Dr. Alex ZHOU, the founder & CEO of newcloth, said at CES, “How can we change the world, if we haven't seen it?”