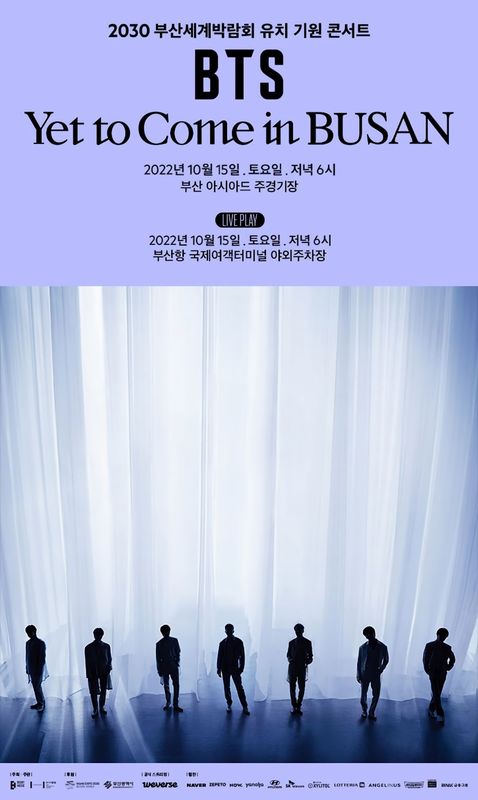 BTS became the ambassador of Busan Expo Bid 2030 and a free BTS concert is set to take place on October 15th, from 6PM Seoul Time. Fans of BTS from all over the world can join the concert by applying for a South Korean visa via  Korea ETA Website.

Korea Electronic Travel Authorization is a system that allows foreigners who desire to visit Korea for the purpose of sightseeing, visiting relatives, attending different events or meetings, or doing commercial activities (but not for profit) to apply for travel permits online.

Nations that have signed visa waiver treaties and countries that allow access without a visa are eligible to apply for Korea ETA.

Currently, 112 countries, including New Zealand, Germany, Singapore, and the United States, have visa-free or visa-exempt travel to Korea. Visitors from these countries must apply for Korea ETA before going to Korea.

Please review the ETA application conditions as well as the countries that have signed the Visa Waiver Agreement and those that enable visa-free entrance into South Korea before utilizing this service.

Travelers must apply at least 72 hours before flying to South Korea.

The issued k-eta is valid for 2 years, and the immigration form is exempted upon entry, allowing you to conveniently go through immigration.

The concert will hold on October 15th. Even though the show is free, everyone who wants to attend must make reservations. The concert will be held at Busan Asiad Auxiliary Stadium which has a capacity of 53,000 audiences and can house 100,000 sitting and standing people, according to BTS’ management business.

For other BTS lovers who cannot make it to the venue, there will be a LIVE PLAY at Busan Port Terminal Parking Lot so they can watch the concert live on screen with other people. The tickets to the LIVER PLAY will be available only to those who did not win the fan club raffle. The ticket reservation will be on the Interpark website. It Would be a pleasant experience as they can still gather with other BTS fans to witness the greatness of the Group. For international fans, the performance will be made available on NAVER NOW, Weverse and ZEPETO, where it can be live-streamed. The

According to BigHit, the reservation to the in-person concert will be divided into a ticket raffle for holders of the BTS GLOBAL OFFICIAL FANCLUB ARMY Membership and general reservations. Holders of the Army Membership can only reserve the seats at the show through a ticket raffle. General reservations will open for the standing area and canceled raffle tickets. The raffle draws for tickets already took place on September 7th and 8th, 2022. Sorry if you are not among the lucky winners. However, there is still some luck for you as the general reservation for the remaining designated seats will be from September 19th to October 14th. You still have time to apply and witness the BTS 'yet to come' concert in Busan. Fans traveling to Busan from across the globe will be offered accommodation packages and additional benefits by the Group's agency, which will be at discounted prices.

Earlier this year, the boys released an album titled "Proof," and the album's lead single, "Yet to Come," was released the same day. This album is a compilation of the band's music and has 48 tracks across three albums. There are three new songs: Yet to Come (The Most Beautiful Moment), For Youth and Run BTS. We expect them to perform some of the new songs at the Busan concert alongside some old-time favorites. They also announced their intention to take a temporary break and focus on solo projects. Since then, J-Hope dropped a solo album, 'Jack in the box' and headlined on the main stage at Lollapalooza on July 31st. He also released a music video for 'Arson,' and 'More". Jungkook featured in collaboration with Charlie Puth for his new single, "left, right." He also released a photo book on September 1st. Suga produced a new song, "Our Island." V also starred in a reality series 'In the Scoop: Friendcation." Other members are also working on new music and personal development.

The Busan concert is the first project the boys will be working together on since announcing their temporary break. The announcement brought about many conspiracies that the Group would be breaking up. BigHit, the Group's agency, has assured the public that the Group is still very much together. They are just taking space to build themselves individually. We are expecting all the ginger and energy from the best boy band in the world. This concert will put a smile on our faces as our OT7 will get to perform together once again. The last show of the Group took place in Las Vegas as part of the acts for their "Permission to Dance on Stage" series.

An issue appearing to be a stumbling block for this concert is that Busan Officials and the Expo committee stated that they don't have funds to cover the show. HYBE is expected to spend 7 Billion Korean Won of its own money to set up the stage and other props for the concert. Fans have expressed their anger at the Busan Officials as the event is to help Busan's Bid and the city is not ready to pay for the event. Hopefully, this problem will get solved on time, and we will witness another breathtaking performance from our boys.

For BTS lovers who want to join this concert event or those who are preparing for a trip to Korea must hurry in applying for Korea ETA.

For more details on the Busan Expo Bid 2030 BTS Concert, visit k-popavenue.com or explore across social media at https://linktr.ee/koreaeta

Or, send an email to keta@koreaeta.kr for KOREA ETA.