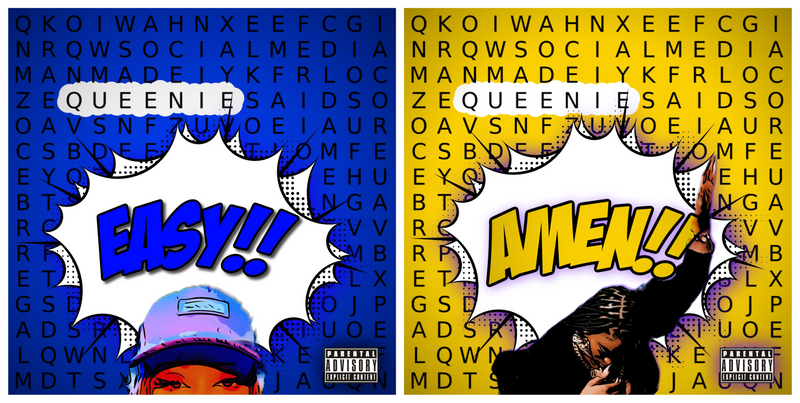 Queenie is not resting in her pursuit of bringing back quality in the hip-hop music industry especially in the United Kingdom as the passionate lyricist drops two new singles for lovers of good music worldwide. Titled Easy and Amen, the songs offer an amazing mix of entertaining yet thought-provoking lines, a feature that has stood the gifted rap star out from contemporaries.

The rap game continues to evolve, practically championing the massive growth experienced in the world of hip-hop and the music industry as a whole. Over the years, a plethora of rappers as well as other categories of stakeholders has emerged in the music scene to deliver an amazing listening experience to the audience. Unfortunately, there seems to have been a major deviation from the features that endeared music lovers to hip-hop and rap, with many of the songs lacking any real content. Consequently, Queenie looks set to challenge the status by bringing back some “realness” into hip-hop, as substantiated by her releases, including the singles, Easy and Amen.

In addition to the recently dropped records, rap lovers might just be set for a series of hard and heavy bar tracks with a message and substance from Queenie as the London rapper is set to drop a song every month. The recent singles are part of Queenie’s journey of creating mind-blowing tracks as she seeks to fill the void in the music scene while opening the gateway of real wordplay music.

Queenie is gaining traction deservedly, gradually stealing the hearts of music lovers with her storytelling skills, and ability to deliver relatable lyrics on topical issues such as unity and empowerment even as she takes her fans to a whole new level with her captivating, energetic performance. Singles like Moves produced by Rob EVN and Anymore produced by Pendo46 have already established Queenie as a star in the making.

For further information about Easy and Amen as well as other projects from Queenie, visit - https://queeniesaidso.com/. Queenie also has a growing online community across social media and major streaming platforms, including Spotify, and Apple Music as well as Instagram, Twitter, and YouTube @queeniesaidso.