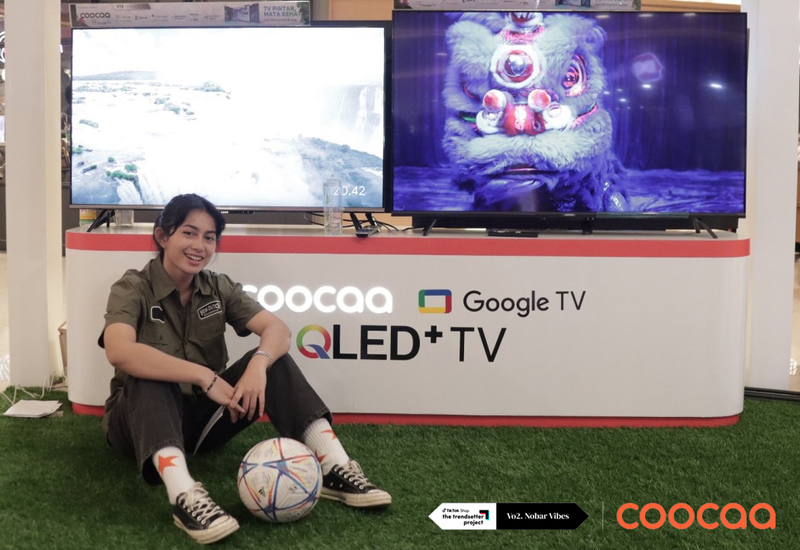 This pop-up store presented coocaa's Y72 and Y72 Pro TV, equipped with Google TV systems that enable fast access to large amounts of online content and allow users to customize their user interfaces. The event was held both online and offline, so audience members from around the world had a chance to participate.

“This pop-up store event was very successful, as it gave World Cup fans a chance to be involved in an immersive experience. With coocaa’s TV technology, fans could fully engage in the event we hosted and participate in livestreamed events and games on our TikTok page,” said Wade Guang, Managing Director, coocaa Indonesia. “Our enthusiastic host interacted with audience members and organized an exciting World Cup-themed quiz game for audiences to engage in. Audience members who answered quiz questions correctly received a prize, increasing enthusiasm amongst those who participated. The quiz game was broadcasted live on the coocaa TikTok page for fans to easily follow along. This pop-up store collaboration allowed us to combine coocaa technology with the World Cup in an exciting and fun way.”

The coocaa TV models featured at the World Cup-themed event are great for people of all ages. The Y72 and Y72 Pro models feature low blue light technology and flicker-free technology to maximize comprehensive vision protection, making this family-friendly technology suitable even for elderly people who wish to preserve their vision health. The recently released Y72 Pro features coocaa's exclusive QLED+ technology, which has the ability to display 1.07 billion levels of vivid colors per frame, offering a realistic TV-viewing experience. This technology aims to restore and reconstruct the details of every frame, giving viewers a more immersive experience.

In addition to providing technology for this pop-up event, coocaa also started a popular World Cup-themed TikTok challenge (#CheerForChampion). The TV company launched a TikTok series of interactive raffle activities during the live broadcasts, giving participating viewers a chance to actively answer the World Cup-related knowledge quiz for a chance to win prizes. The viewer with the most correct guesses was named the winner of the day and had the opportunity to win a free high-quality TV from coocaa and other exciting prizes. The live broadcast immediately attracted a massive turnout of viewers, and many prizes were awarded to audience members during the live event.

For more information about coocaa, go to www.coocaatv.in.