The Jim Henson Company, Wētā Workshop, and Quidd are thrilled to announce their collaboration on a collection of premier digital collectibles featuring characters from the beloved film, The Dark Crystal.

The Jim Henson Company, Wētā Workshop, and Quidd are thrilled to announce their collaboration on a collection of premier digital collectibles featuring characters from the beloved film, The Dark Crystal. This marks the first appearance of officially licensed digital collectibles from Wētā Workshop, the award-winning concept design firm, on Quidd.. 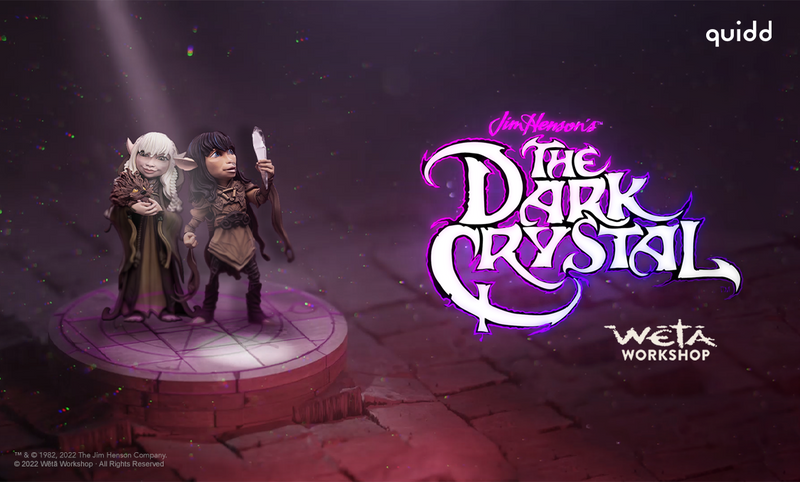 Originally released in 1982, Jim Henson’s The Dark Crystal was a first-of-its-kind dark fantasy film that follows the story of two Gelfling, Jen and Kira, on a quest to restore balance to the world of Thra, and overthrows the evil Skeksis by restoring the Crystal of Truth. Using cutting-edge animatronics and puppetry, the film pushed new boundaries in movie-making.

In the 40 years since its original release, The Dark Crystal has been reviewed and remastered by film enthusiasts and has a dedicated and growing global cult following of all ages.

The Dark Crystal x Wētā: Masterpieces features stunningly-detailed 3D renditions of fan-favorite characters, carefully crafted by the artists at Wētā Workshop, ensuring each digital collectible is of the highest quality. Each collectible is interactive and AR-compatible, giving fans and collectors alike an unprecedented ownership experience.

“We are excited to be partnering with Wētā Workshop and The Jim Henson Company on this exciting, first-of-its-kind collection,” said Michael Bramlage, CEO of Quidd. “Not only was this collection meticulously designed for The Dark Crystal’s passionate fan base, but it also contains a number of special surprises that won’t be revealed until the collection drops.”

Wētā Workshop Head of Consumer Products, Kelly-Ann Tyson says creating digital versions of beloved characters from The Dark Crystal is an opportunity for fans to own something truly unique.

“At Wētā Workshop our artists are constantly innovating and raising the creative bar. We are really pleased to be teaming up with The Jim Henson Company and Quidd to work on this drop of premium digital collectibles and think The Dark Crystal fans will love these new creations. It’s a fantastic way to mark the anniversary of the film.”

And, according to Melissa Segal from The Jim Henson Company “it’s wonderful to see two trusted partners in Weta and Quidd collaborate to celebrate the 40th anniversary of The Dark Crystal in an inclusive way that so beautifully features the iconic characters from the film.” ”

Starting on Wednesday, December 21, The Dark Crystal x Wētā: Masterpieces collection will be available for purchase with an opening price point of $5.99 on the Quidd marketplace at https://market.onquidd.com/

Quidd, a subsidiary of Animoca Brands, is the original digital collectibles and NFT marketplace. For over six years, Quidd has facilitated the issuance, sale, and exchange of limited-edition, officially licensed digital collectibles, featuring more than 325 of the world's most popular brands, including Disney, Game of Thrones, Rick and Morty, the NBA, Manchester City, and many others. Quidd supports off-chain and on-chain digital collecting - to multiple blockchains - making it an ideal front door for mainstream fans to start building their first NFT collection. For more information, visit https://market.onquidd.com or download the apps here.

Established by Richard Taylor and Tania Rodger in 1987, we are best known for our screen work on The Lord of the Rings trilogy, Avatar, and Dune, our immersive visitor experiences, Gallipoli: The Scale of our War, Expo 2020 Dubai’s Mobility Pavilion and Wētā Workshop Unleashed. Based in Wellington, New Zealand, Wētā Workshop’s ground-breaking work has earned us multiple international awards.

About the Jim Henson Company,

The Jim Henson Company has remained an established leader in family entertainment for over 60 years and is recognized as an innovator in puppetry, animatronics, and digital animation. Henson’s most recent television credits include the Emmy-winning Fraggle Rock: Back to the Rock, as well as Slumberkins, Harriet the Spy and Fraggle Rock: Rock On!, all for Apple TV+, Word Party Presents: Math! for Netflix, Duff’s Happy Fun Bake Time for discovery+, Earth to Ned for Disney+, and the Emmy®-winning Netflix Original series The Dark Crystal: Age of Resistance. Other TV productions include Word Party (Netflix), Dinosaur Train (PBS), Splash and Bubbles (PBS), Sid the Science Kid (PBS), and Julie’s Greenroom (Netflix), as well as Fraggle Rock, The Storyteller, and the sci-fi series Farscape. Feature film credits include Guillermo Del Toro’s Pinocchio (Netflix), The Star (Sony Pictures Animation), Alexander and the Terrible, Horrible, No Good, Very Bad Day (Disney), and the groundbreaking fantasy classics The Dark Crystal, and Labyrinth. The Company is currently in production on the feature film The Portable Door starring Christoph Waltz.

With additional locations in New York and London, The Jim Henson Company is headquartered in Los Angeles on the historic Charlie Chaplin lot, complete with soundstage and post-production facilities. The Company is home to Jim Henson’s Creature Shop™, a pre-eminent character-building and visual effects group with international film, television, theme park and advertising clients, as well as Henson Recording Studios, one of the music industry’s top recording facilities known for its world-class blend of state-of-the-art and vintage equipment. The Company’s Henson Alternative credits include The Curious Creations of Christine McConnell (Netflix), the feature film The Happytime Murders, and the popular live puppet improvisational show Puppet-Up! – Uncensored.