Designed as the “Amazon of the blockchain,” the Safex Market offers buyers and vendors a place for the safe exchange of cryptocurrency. The blockchain marketplace brings merchants, products, and patrons together. 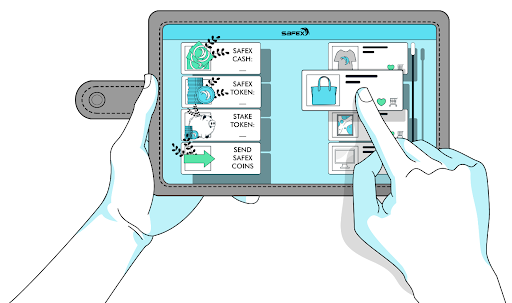 Safex founders Daniel Dabek and Aharon Bernal created their company with the goal of building the Amazon of the blockchain. The Safex Market offers buyer safety for crypto commerce. The emergence of Bitcoin brought about undeniable economic change on a global scale, but Safex founders think the industry is stuck on simply sending and receiving cryptocurrencies.

“The blockchain, the technology that emerged with Bitcoin, can be molded into many modern applications, and in our case, an eCommerce platform embedded directly into the blockchain. That blockchain is called Safex,” Safex CEO Dabek said. “This technology enables the lowest cost to entry for anyone in the world to open an eCommerce store and to reach a customer base on a global scale.”

Dabek, who created the Safex Blockchain, said he developed the idea in 2015 before the worldwide interest in cryptocurrency exploded. He, alongside his team, programmed the decentralized commerce protocol directly into the blockchain. The idea began with a $50,000 capital investment. He believes it has grown to a monumental achievement, with nearly three million dollars worth of products listed on the Safex Marketplace—the program designed to commercialize the not-for-profit blockchain.

Safex was built with a stable emission model, which distributes the cryptocurrency over time, rather than dumping 90 percent of the coin on the first one percent of users. Dabek said Safex was designed for growth and stability.

“We wanted to bring a global catalog of products accessible to everyone in the world, and we have accomplished that with the deployment of the Safex Blockchain Marketplace in December 2020,” Dabek said. “This empowers more people than any other technology in the world. Real-world use for ordinary people to do extraordinary things.”

Building the “Amazon of the blockchain”

Dabek partnered with Safex Chief of Product Bernal to turn the Safex blockchain into a digital marketplace where vendors and buyers could complete real-world transactions using cryptocurrency. Dabek and Bernal plan to make the Safex Marketplace a consumer hub, competing with powerhouse retailers like Amazon.

The next generation of eCommerce

Dabek introduces the Safex Market as a decentralized eCommerce platform and cryptocurrency network. The Safex Market uses Safex Cash, which is obtained through mining, and the Safex Token, which users need to start an account on the marketplace.

“Safex is an eCommerce platform decentralized into the blockchain where now anyone in the world can buy and sell goods and services, earning cryptocurrency in the process,” Dabek said. “The Safex blockchain has paved the way for us to see what is now known as the world marketplace.”

Dabek and Bernal plan to continue innovating in the eCommerce and cryptocurrency markets, bringing Safex to the forefront of the industry. For more information about Safex and the Safex Marketplace, visit the website or check for video updates on YouTube.