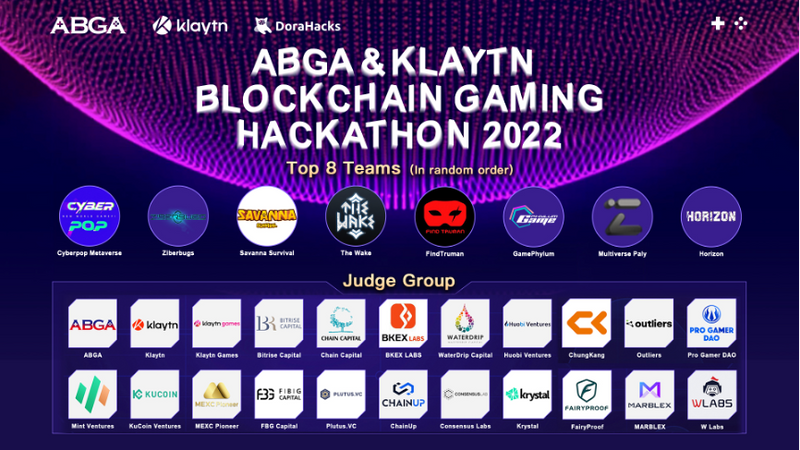 The semi-final (second round) Top 8 teams for the Blockchain Gaming Hackathon 2022 were formally revealed on September 16 by ABGA (Asia Blockchain Gaming Alliance) and Klaytn, the most influential public chain in South Korea, with the scoring and selection successfully concluded. Out of 84 applicants, the Top 8 teams will win a sizable prize pool with $2 million in investment, $90,000 cash awards from Klaytn, and a bonus for Credit by AWS.

Hackathon Semi-final Contest (Second Round) Online Pitch Meeting successfully held on September 13. TOP 16 teams presented impressive pitch decks to the on-site judge group and the audience from various aspects, such as project introduction, software development, economic model, team introduction, and development plan. The Top 8 finally stood out from the vetting process. They are:

SavannaSurvival is set to inspire gamers on wildlife, conservation & blockchain education in a very fun way! Learn about the natural world while exploring the many biomes of SavannaSurvival and contribute to conservation simply by being a part of our community, yet explore the new WEB 3.0 experiences as the first step into the blockchain world.

The Wake is the world’s first and largest isometric multiplayer role-playing (MMORPG) game to feature Norse mythology in the metaverse. The Wake is an NFT-based system and uses a $TWAKE token in-game for activities, events, and tournaments.

FindTruman is the First Alternate Reality Game in Metaverse. On the FindTruman platform, players could experience the joy of story-gameplay, the reward of content co-creation, and the potential airdrops of story NFTs. Players can join the co-creation procedure of the story and IP, and with the commercialization of this story into 3D scenarios in various web3 metaverse, or a transformation of these stories/IPs into web2 games can be initiated.

GamePhylum is a game Information data aggregation platform that is built for the new wave of future Web3 games. It incentives gamers to write strategy and like strategy, provides users with visualized and high-value game on-chain data, helps game companies in all stages of marketing and promotion, and opens up the ecology built with game tool developers.

Cyberpop is an open-world UGC blockchain metaverse game combined with exploration, combat, and play- create- to earn. It is the world's first open-world MMO- RPG metaverse game with cyber style. Cyberpop Metaverse is created by a top technical team whose members are from Tencent, Ubisoft, and Huawei and is officially authorized by "Prince of Persia". Utilizing the UGC editor, players can build homes, cars, airships, roads, etc.

Horizon is a near-future open world and independent economic system. A lassie's railway journey is presented in the form of a unit drama. The game is based on the background stage of the projection world which is infested with madness and indifference.

ZiberBugs is a PvP-focussed, competitive auto battler created for gamers with a ‘fun first’ principle. It aspires to greatly increase the number of professional gamers in the world. The game seeks the perfect balance between people wanting to pay for entertainment and people wanting to contribute to the ecosystem and get rewarded for it.

On September 26 at Marina Bay Sands in Singapore, the Top 8 teams will be invited to Hackathon Demo Day. The teams will make a presentation with an application demo and compete for the final ranking, receive on-site judge group mentoring, awards from the special guests, and network closely with the nearly 300 attendees from top institutions and teams. The demo presentation will be held on September 26, 2022, from 14:00-18:00 (UTC+8), followed by an Awards Ceremony & Welcome Dinner at 19:30-21:30 (UTC+8).

In the hackathon period of about two months, 84 project participants from around the world applied for this hackathon, which resulted in several excellent and creative Web3 gaming projects. ABGA will keep focusing on the top teams and offering the required technical and resource support.

Asia Blockchain Gaming Alliance (ABGA) is an ecological alliance established by mainstream organizations in the global blockchain industry, as well as outstanding organizations and individuals full of enthusiasm for blockchain gaming, metaverse, and NFT. Through a wealth of online and offline activities and the latest industry information analysis and discussion, ABGA inner members are combined to discover, invest and incubate more potential projects to promote the vigorous development of the industry.

Klaytn is an open-source Layer 1 blockchain focused on the metaverse, gamefi, and the creator economy. Officially launched in June 2019, it is the dominant blockchain platform in South Korea and is now undergoing global business expansion from its international base in Singapore. Klaytn has become the most influential blockchain platform in Korea by providing faster and more secure transactions with our immediate finality with a one-second block generation time.