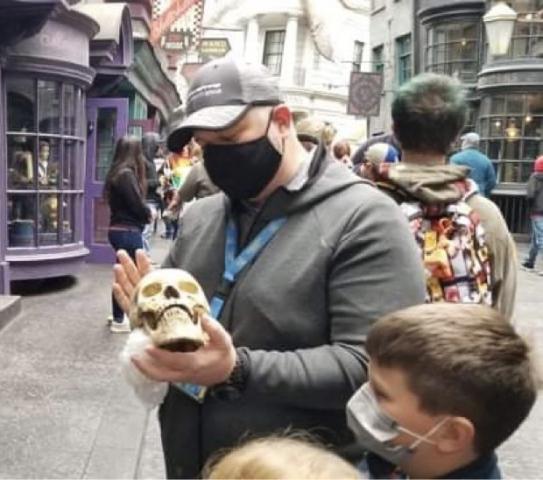 The artist, known for his realistic human skull replicas which have been featured in TV shows, is now offering fans the opportunity to find one of his skulls at the Wizarding World in the Universal Studios Florida Theme Park.

More details can be found at https://realhumanskull.com/hideandseek

Wylie explains that he got the idea for the skull hunt when he stumbled upon Universally Crafted Orlando on Facebook. This community of artists craft art pieces related to Universal Studios and place them at the Park for people to find. The first Harry Potter skull Zane hid was the Ravenclaw skull which took five minutes to find.

Zane says he enjoyed the experience so much that he decided to continue the hide-and-seek game, and has since hidden a Hufflepuff Skull and a Voodoo Donut skull – he loves donuts – at the Park, both of which were successfully found.

Articles have been written about Wylie’s Hogwarts skull hunt, driving many fans to the Park. People also started subscribing to Zane’s mailing list to make sure they don’t miss the next game. As a result, Zane’s skull hunt – as it came to be known – has led to a significant increase in the number of visitors to the Park. Reportedly, with so many fans visiting the theme park to seek the hidden Harry Potter skulls, attendance was up 5% compared to similar days in the previous seven years.

Zane Wylie is an established artist that specializes in handcrafted skull replicas and TV props. His work was featured in famous TV shows such as Preacher, Constantine, and The Lost Symbol. Celebrities have also taken a liking to Zane’s work. Stephen Amell, Michael Rooker, and Sebastian Stan are just some of the big names who have added a Zane Wylie skull to their art collection.

Aside from his involvement with Universally Crafted Orlando, Zane is currently planning a TV show. In a recent interview, he explained that he’s narrowing down the list of companies to work with on his newest project.

Zane said, “Since I started with Universally Crafted Orlando, articles have been written about me, and thousands of people have joined my mailing list. I’ve had more people join my list in one month than I ever had in my 10 years of carving. I will hide at least one wizarding skull a month until I am no longer allowed to do it.”