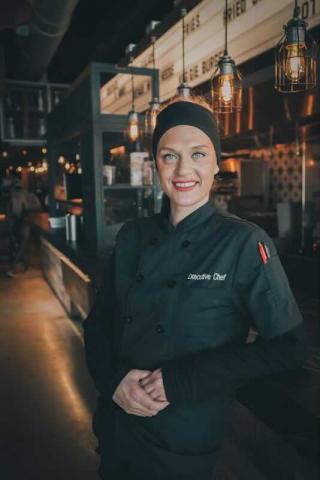 More information about Zandria Harper is available at https://www.zandriaharper.com

Zandria Harper draws from her deep knowledge and experience working with a wide range of culinary styles including American, Italian, Mexican, Asian, Australian, and Cuban. She also brings a distinctive Steakhouse influence to the restaurant’s casual dining concept.

Speaking about the new healthy menu, Chef Harper says, “We are excited to showcase our updated menu featuring healthier, more flavorful dishes that dispel the idea that healthy food is boring.”

Zandria Harper is a certified professional Chef de Cuisine at Le Chick with more than a decade of experience in the culinary industry, serving hundreds of thousands of guests at Miami’s top restaurants. She has worked with some of America’s top chefs including Chef Steve Burns at the iconic Muckleshoot Casino, Chef Gary Karashuma of Warthog Barbecue, and Chef Michael Hawk at La Cote at Fontainebleau Miami. Her professional experience includes working with Chef Aaron Brooks at Edge Steak & Bar at Four Seasons Miami, Chef Jose Gamez at Four Seasons Palm Beach, and Chef Antonio Mermolia at Le Sirenuse at the Surf Club Miami just to name a few.

Everybody that was interviewed regarding Zandria Harper has said nothing but the highest praise emphasizing her raw talent, skills and overall beauty being a powerful women running her own kitchen in these modern times, it’s such a beautiful thing to see and an honor to be a part of. She says she will continue to elevate her game and continue to create masterful dishes made with love.