When Marketing Activation Truly Makes a Difference in the Community

It's not often that marketing actually makes a difference in peoples' lives. This activation marketing idea, meeting a real need for economically-disadvantaged children, will warm your heart. 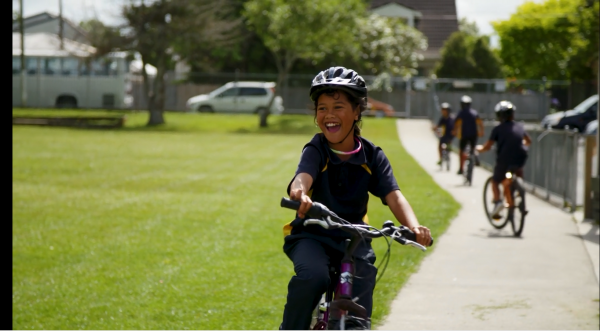 “Bike It Forward” is an idea that’s already changing Kiwi lives—and an idea that dramatically demonstrates both the power and the very real significance of what’s typically called marketing activation (or sometimes experiential marketing).

The “Bike It Forward” idea began, as many worthwhile endeavors often do, with people talking amongst themselves. Then the whole concept took on a life of its own.

Lina Montero Soto was chatting to other parents as she watched her young daughter prepare for the upcoming Sanitarium Weet-Bix Kids TRYathlon. During the conversation, Lina was surprised to hear that for some children the TRYathlon is simply not an option, primarily because they don’t have access to or can’t afford a bike.

It was, everyone agreed, a real shame that some Kiwi kids were missing out on experiencing the fun and adventure of riding a bike and from participating in events like the Weet-Bix Kids TRYathlon.

Most community conversations, like this, tend to generate surprise, a little outrage and then a bout of headshaking—but not much action.

Lina, who is General Manager of Auckland New Zealand activation marketing agency Magico Marketing Activations (https://magico.co.nz), was determined to do something about the problem.

Her investigations revealed that there are often many well-to-do households that have an old bike stored in the garage gathering dust, not going anywhere. Some require repairs and maintenance, others only need some TLC.

“What if,” Lina wondered, “there was a program to encourage such bikes to be handed in, to be refurbished and made available to children whose families couldn’t afford to buy or rent their own bikes?”

Using the collective skills of Magico, Lina promptly put together a proposal to create such a program, henceforth to be known as “Bike It Forward”. She took the idea to Bike Barn, an existing Weet-Bix Kids TRYathlon sponsor.

To cut to the chase: Bike Barn loved the idea and, in combination with Magico, made “Bike It Forward” a reality.

Bike Barn trialed the campaign in Auckland in December 2018 in partnership with the Weet-Bix TRYathlon Foundation and received more than 50 bikes that were refurbished and donated to children at Homai School and Manurewa South School.

Tone Kolose, Principle at Manurewa South School said that being part of the “Bike it Forward” campaign had made a huge difference to the lives of the kids at the school, a sentiment echoed by Bathsheba Tofilau, Associate Principal at Homai School.

What sort of difference? The children spelled out their enthusiasm in their own words:

“6 months ago I asked my parents (for a bike) but there was too many bills for my grandfather’s house to pay. My father needed to help pay too. I know how important this was so I understand.”

“I will cross my eyes, toes and fingers hoping that I will be selected to have a bike. If I am selected I will go home and scream at the top of my lungs until I faint.”

“I love to ride my bike. I have one at home but it is old and a little unsafe because it is a little rusty and the brakes don’t work properly.”

Now Bike Barn is rolling out the “Bike It Forward” program across New Zealand from 1 January 2019, inviting New Zealanders to donate bikes that their children have outgrown or no longer use, to be given to less fortunate kids, who haven’t yet experienced the thrill of riding a bike, and who hope that one day they too will be able to participate in a Weet-Bix Kids TRYathlon.

Donations, of children’s bikes from 16” to 26”, can be made at Bike Barn stores across New Zealand. Every bike donated is refurbished by Bike Barn mechanics and then gifted to disadvantaged kids and schools throughout New Zealand.

Magico is thrilled to have been able to take this idea from concept to glorious reality. In Lina’s words, “I’m so grateful that we’ve been able to apply the principles that we use every day for marketing activation and help to really make a difference in so many families’ lives.”