Hosted In Canada has launched a new advisory focusing on the importance of secure websites online in today’s climate. Sites that don’t have SSL/TLS are in danger of being left behind. 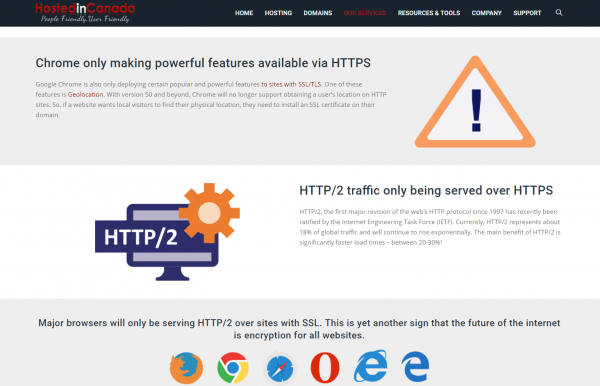 A new security advisory has been launched by Hosted In Canada, the friendly web host that helps people to find their ideal domain. It explains that 97% of sites online are not secure, and that they run the risk of being left behind. Every site working with Hosted in Canada will be secured for free.

More information can be found at: https://www.hostedincanada.com/google-ssl-requirements.

The advisory indicates that there are changes coming to Google’s HTTPS requirements, which will have a big impact on sites around the world. Hosted In Canada explains that HTTP will soon be a thing of the past, and that it’s time for people to start preparing for a totally encrypted web.

According to a February 2016 Netcraft report, only 3% of websites today’s make use of SSL/TLS encryption. This is a basic level of security that every website should have, and is something that every customer working with Hosted In Canada will enjoy.

In an era where 90% of large organizations have been hacked, it’s controversial that so many websites online simply aren’t as secure as they could be. Google is now changing its settings, and websites that don’t feature this kind of encryption are likely to get left behind.

New HTTPS incentives will include warning visitors when they visit a website that doesn’t have SSL/TSL configured. This is to ensure that awareness is spread, and to display more initiative, allowing people to realize when they are landing on a site that has no data security.

As part of the new initiative, Google Chrome will show a red “X” beside the domain name of any site that doesn’t comply. Further to this, Google already gives an SEO rankings boost to sites with SSL/TLS. After its announcement in 2014, it implemented these changes, and the effects are starting to be felt.

Websites with SSL are now experiencing up to 5% more in search visibility simply through their security options. Full details can be found on the URL above, which breaks down a number of other areas pertinent to the issue.