Jaroslav Valtr set the third best time among the trucks today, but an additional two-minute penalty for exceeding the speed limit on yesterday's stage dropped him to fifth place. 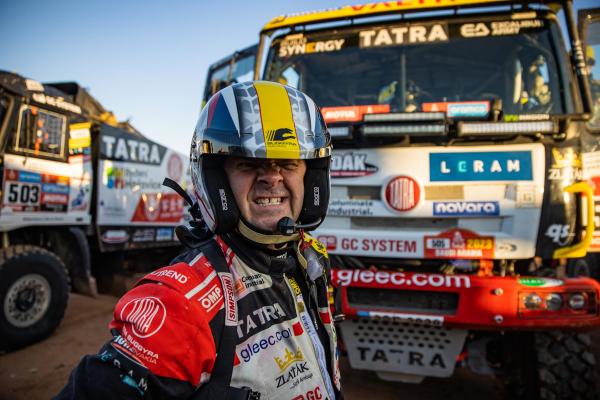 The Buggyra ZM Racing crews have completed the first part of the marathon stage. Martin Šoltys was classified 13th, holding seventh place overall. Róbert Kasák recorded the 17th best time today, making him 22nd overall. In the T3 – Lightweight Prototypes category, Aliyyah Koloc was the faster of the pair of Buggyra Can-Am DV 21s , finishing 20th today which puts her 36th overall. Josef Machacek was held up by a rear axle repair, resulting in a 38th stage time and 11th place overall. Radovan Kazarka was classified second in his category of the Dakar Classic and is third overall.

The first part of the marathon stage brought a change from the usual Dakar practice as mechanics were only allowed to repair cars at the finish of the 333km long timed test, Limiting repair tim to two hours. In fact, working beyond the permitted time limit could entail a significant penalty.

Jaroslav Valtr knew from the start that today’s stage would suit him: “There were technical passages between the rocks. Then there were some dunes They made for only about ten percent of the whole routebut they were quite difficult. I hesitated on one of them and lost about two minutes. I almost made it up the dune, but I had to go back and tackle it again. We started too far back, the dunes were very rough.”

“After the neutralisation there were some bumpy sections which are ideal conditions for Tatra. We flew over those riverbeds. After two days when we were not doing well and our technical skills were a bit off, we needed to kick it up a notch,” said the Tatra Phoenix driver who was deprived of the bronze stage by the relentless Saudi radar. Yesterday they measured 50 km/h instead of the 30km allowed, for which the organisers increased Valtr’s time of the seventh stage by 120 seconds.

In the evening, the pilots will have a quiet time in the bivouac, as only a two-hour service at the finish is allowed between the two parts of the marathon stage, and the crews are alone in the bivouac. “I’m really looking forward to the tranquility. Up to now I have gone to bed right after every stage as I was really tired. I’m not the youngest anymore and I am not sure if it’s normal at this age to chase around the desert with young guns. Sometimes I get a little fed up, and I’m looking forward to getting some rest today. But then again, we don’t have that nice motor home of ours where it’s warm. Unfortunately, it’s gonna be a bit of a camp. We need to rest and eat well,“ the Tatra Buggyra ZM Racing driver said with a smile.

His teammate Martin Šoltyshad some issues with his truck in the second half of the stage. “The start was good. Everything worked well in the big dunes. There was one dune we didn’t get out of and had to go around it. I think everybody had a problem there. Unfortunately, at about kilometer 230 we lost both shock absorbers on the front left wheel. We had to stop, take it apart and take it out. We lost some time there and drove slowly for the remaining 100 km. It was really uncomforable, you couldn’t go fast without the shock absorbers, so we had to weld the shock absorber bracket,” described the Tatra 815 pilot the necessary repairs at the end of the stage.

Soltys was not looking forward to the makeshift bivouac. “Half of the marathon stage is over. We’ll probably sleep on a deckchair somewhere, they say there’s nothing fancy there. I remember when we had thick matresses… But it’s fine,” he said.

Alliah Koloc had a relatively uneventful stage without any serious issues. “The drive to the start was very long today. We had a little trouble with the brakes while going there but we managed to more or less fix them. The beginning of the stage was sandy, then there were rocks . One of our V-belts broke, but we quickly replaced it. And now we have another long journey to the bivouac,” said the 18-year-old Dakar debutant.

The second pilot for Buggyra ZM Academy, Josef Machacek, made use of his tools to the max.. “After the start the desert scenery was beautiful. Then I suddenly started having problems with the steering. It was difficult but I kept going. When we came to the big dunes, we realised that we had a damaged rear half-axle that was only working on one wheel. It was impossible to drive in the dunes, so we had to fix the issue. We wasted a lot of time there and in addition lost more time towards the end of the stage as there were a lot of rivers and rocks,” explained the Dakar doyen.

After having to sleep in the dunes yesterday, Róbert Kasák was grateful for the fact that this time he finished by daylight. “To use Josef Macháček’s expression: ‚We beat the darkness‘. The stage was nice. fast and with a lot of rocks. The final part was terriblly bumpy but we did it. For the Tatra, these sections are great but not for our bodies who aren’t used to this kind of movement . We’re better in the dunes, where we left five or six cars behind us,” said the Tatra Buggyra Slovakian pilot.