The Buggyra ZM Racing team's pilots had a great start to the second half of the Dakar. Jaroslav Valtr in the Tatra Phoenix was third in today's truck classification. 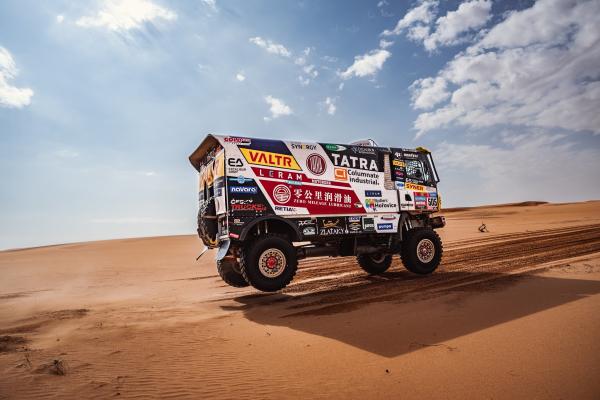 The reliable Josef Macháček in the Can-Am DV 21 is knocking on the door of the top ten overall classification in the T3 – Light Prototypes category. Valtr is fifth in the overall standings after the 9th stage. Two places behind him is today’s seventh placed Martin Šoltys, also in a Tatra. Róbert Kasák is improving steadily, he has moved up to 20th overall, while finishing 15th today. Aliyyah Koloc posted the twentieth best time of the day and is now 35th overall in the T3 – Light Prototypes category. Josef Machacek stays in 11th overall, he was 22nd today. In the Dakar Classic, Radovan Kazarka in his Tatra Puma is still third in his category, finishing sixth today.

Jaroslav Valtr didn’t start the day in a very positive mood, but at the finish line his smile had returned. “I wasn’t in a good mood at the start, but that is not something the team care about. I fought for all the guys, for the whole team. Especially for the mechanics who worked hard for two days to put the truck together. Today we had a technical, bumpy track, not even a riverbed. Again, it was a track made for Tatra. It was bumpy, even in the fast passages, and sometimes the big bumps hurt,” described the driver of the Tatra Buggyra ZM Team his feelings.

His teammate managed to stay at the top despite some technical issues. “I’m more mentally exhausted because the front axle was the only thing that was holding us back the whole stage. Somewhere in the middle there were terrible swamps. I saw Macik and van den Brink being stuck there, but we made it through. About ten kilometers before the finish, the charging belt broke, so we were glad we were close to the finish. The result is great for what was a very difficult day today,” said the driver of the Tatra 815.

Róbert Kasák, in his first Dakar start with Tatra Phoenix, is still moving forward in the classifications. “Everyone is in good shape, that’s the main thing. It started well, then we went into a long river. We saw about four or five trucks in there, but Tomas found the right direction to the way point without issues. I took it straight and somehow we skipped the whole section. After that, nobody managed to catch up with us,” said the pilot of the Tatra Buggyra Slovakia team.

Aliyyah Koloc had the better result of the two Buggyra ZM Academy crews. “Today was a very good day, the stage was fast. In the first part, we were climbing small dunes. They were hard to read, so I drove more carefully. Then there was a lot of mud and water, we got quite wet. Other than that, we didn’t have any problems, I just lost a bit of time looking for a checkpoint. But we had beautiful views of the canyons,” said the 18-year-old Dakar debutant.

Josef Macháček, two generations older, was once again going at his skillful pace, although this time he got a bit muddy. “We were expecting some easier connecting stage before the hard sections. It started with beautiful dunes, but again they were very wet. What followed afterwards was probably not what anyone expected. We were chased through a mud bath, some cars even got stuck in there. The last part after refueling was fast, but still a little dangerous. At that speed, there were unmarked jumps and holes, and there were a lot of rocks. There was a risk of a puncture, but we made it,” said the six-time Dakar champion.

Radovan Kazarka is still third overall in the Dakar Classic. “It was rocky at the beginning, a bit of a grind, followed by faster passages. I was expecting dunes, but the sand was really squashy. I hope that the organizers will finally send us to race in the dunes. In the morning, they didn’t give us a roadbook and we followed the tripmaster to the starting point where they handed it out to us. In any case, my navigator Josef Kalina handled the situation very well. On the track we were chasing a Spanish crew for a bit. We didn’t see any river fords , but there was a very muddy section in one canyon with just stones and rocks,” said the Slovakian racer.