Valentina Mami has launched the new video for her hit single, “Necesito”, featuring El Green Goblyn. It has been her most popular release on Spotify and is now available for fans to watch on YouTube. 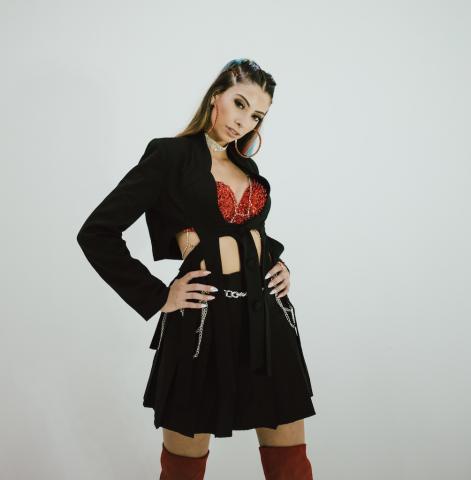 The video features a distinctive opening sequence where the Colombian-born singer is ensnared in chains within a padded cell. This is contrasted against a vibrant nightlife scene and engaging dance sequence.

More information can be found at: https://youtu.be/yh_lWwsAcWQMAMI

Following the video’s release, fans are encouraged to join in by leaving a comment and discussing the artistic style of the piece. It’s also available to stream across all major platforms, and has over 200,000 plays on Spotify.

Valentina Mami is a bilingual Latin and English-speaking artist who has established herself as a star to watch following a series of popular releases and festival appearances. She has a proven history of songwriting, and is professionally trained as a dancer.

This unique combination of skills leads to a creative and appealing catalogue of songs across a range of styles. These include English club anthems, traditional rap and hip hop, commercial pop songs, and more.

Critics underscore that she has established her own niche in the Latin female rapper space, with a versatile range of abilities.

In addition to watching the newly launched video for Necesito, fans are encouraged to visit her platform on Conqr. Here, anyone can sign up to get exclusive access to new songs and releases as they happen.

One of the most popular elements of this space in the current landscape is exclusive access to NFTs, enabling fans to own moments of her career and build their collection of cards.

The singer states: “What a thrill to share this video with the world! I really enjoy it and hopefully you too. I really appreciate all the support you give me. Leave me a comment with your opinion: how do you interpret the video? Which part did you like the most? I read them all.”