Colombian-born singer, Valentina Mami, has released a new video showcasing the unusual journey she had to Holy Shift Festival. When her plane was delayed, she encouraged TikTok star, Cesar Ruiz, to fly her. 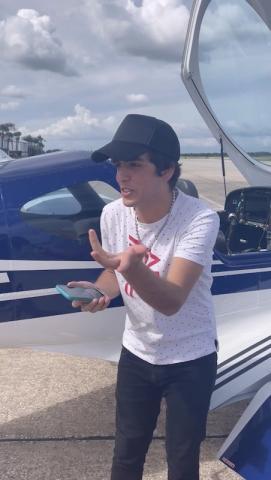 The artist wanted to travel to Sebring Airport in order to arrive at the festival in time for her headline act. Cesar accepted the plea, and the newly launched video captures every moment of the flight through black box camera recordings.

More information can be found at: https://valentinamami.conqrapp.com

The video is available now on Valentina Mami’s Instagram page (@ValentinaColombia), where fans can see the nerve-wracking experience it transpired to be.

At the time, Cesar was taking pictures with his uncle’s plane. Unbeknownst to the Colombian singer, Cesar was not the pilot — and had never flown without direct supervision.

Following takeoff, nerves set in, and Cesar worried that he had made the biggest mistake of his life. However, he persevered with renewed determination, believing that in order to impress a woman, it was important to take risks.

Valentina was able to make it to the festival on time, where she showcased her unique flair for rapping, singing, and songwriting. The audience enjoyed a versatile performance, with a varied set ranging from Spanish songs to traditional English club anthems.

Holy Shift Festival was held over the last weekend in August, and featured over 20 hours of motorsport and music. Special events included car drifting competitions on two tracks, ride-alongs, and a showcase for cars, trucks, and bikes.

Valentina was one of the headline acts, and her performance underscored the allure of the weekend, with its exciting combination of events and activities.

A spokesperson for the singer states: “Valentina is versatile, constrained to no single genre of music or language, giving her global collaborative opportunities. Her unique combination of abilities gives her a huge advantage over any competition that may emerge.”

After watching the newly launched video, fans are encouraged to sign up for Valentina’s page on CONQR, the innovative new platform for artists around the world. Anyone can access her latest single, “Baby”, along with a range of other tracks, videos, albums, and blog posts.

Exclusive live streams are also held each month, giving fans the opportunity to be part of the social experience surrounding Valentina’s life.