The Voyager 1 Turns 40 and Still No Battlefield Earth Yet 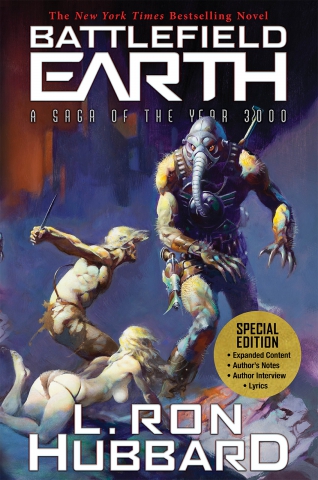 The Voyager 1 space probe turned 40 this year, while L. Ron Hubbard’s science fiction novel Battlefield Earth turned 35. Both continue to interest new generations, garner new fans and media. And there IS a connection. Some scientists considered sending the Voyager space probe out into space as a wonderful and innovative idea, while others considered it foolish and dangerous.

As British astrophysicist Stephen Hawking stated that a visit by aliens to Earth would be like that of Columbus arriving in the Americas, “which didn’t turn out very well for the Native Americans.” It was a warning, but not the first.

The science fiction novel Battlefield Earth, released in 1982, takes place in the year 3000 where a post-apocalyptic Earth lay in ruins dominated by an alien race that wiped out the majority of humankind so it could mine the planet of it’s resources. L. Ron Hubbard references the Voyager in the book and gives a glimpse of a could-be scenario in a conversation between aliens:

“There was something to these creatures. Before we came along, it says here, they had towns on every continent. They had flying machines and boats. They even appear to have fired off stuff into space.” “You know how it says we got here?” “Man apparently sent out some kind of probe that gave full directions to the place, had pictures of man on it and everything. It got picked up by a Psychlo recon and you know what?” “The probe and the pictures were on a metal that was rare everywhere and worth a clanking fortune. And Intergalactic paid the Phychlo governors sixty trillion Galactic credits for the directions and concessions. One gas barrage and we were in business.”

The Voyager 1 went out into interstellar space in 2012 and is currently over 13 billion miles from Earth. As it turns 40 this year, it is hoped that science fiction does not become science fact or at least if it does, our friends arrive a little more cute and cuddly like E.T. If not, L. Ron Hubbard’s Battlefield Earth will be more of a Take-Back-Earth manual than a science fiction novel.

Since its initial release in 1982, Battlefield Earth has sold over 4 million copies and was rated #3 of the top 100 novels of the 20th Century in the Modern Library Readers Poll. This new edition has expanded content containing an author interview published in the Rocky Mountain News shortly after the book’s initial release and a Discussion Guide.