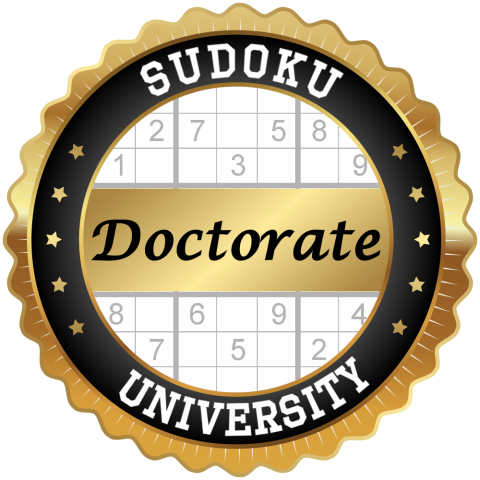 Earlier today, The Sudoku Professor finally announced the release of Doctorate Course – it’s new advanced compilation of Sudoku solving techniques compiled into one unique and user-friendly system, which has been in development since approximately August of 2012. The main aim is to give people breakthrough instruction when it comes to solving the hardest Sudoku puzzles on the planet. The course explains complex and often overwhelming techniques in a way that is easy to follow as well as to understand…. but it does so, with a difference.

Chad Barker, The Sudoku Professor himself, says: “We wanted to try something new with Doctorate Course. Anyone familiar with the Sudoku Solving Techniques & Training online community will probably have noticed how everyone else seems to obscure these techniques and make them inaccessible to average people because they use complicated or confusing terminology and do not bother to actually teach the fundamental principles behind their examples…This is a major problem because it leaves prospective Sudoku learners unable to solve on their own…”

So as a welcome breath of fresh air, the Doctorate Course will instead break each lesson down into step by step video instructions with included examples so that students can follow along with the goal-directed walkthroughs specifically chosen to highlight the techniques taught in each lesson. The Sudoku Professor chose to make this move after hearing from many among the thousands of existing students about their frustrations concerning other people’s attempts at explaining these advanced concepts.

Barker also added, “We want to give our customers confidence and the capability to solve even the hardest Sudoku puzzles on their own without guessing or peeking at the answers. With the Doctorate Course, they have a fresh new possibility to solve the most difficult puzzles in existence. We want them to feel like they really grasp the concepts and lessons in a way that they can apply them right after watching the videos, but more importantly, that they feel like an old friend has been helping them learn the whole time when they complete the Doctorate Course. Trying something new is always a risk, but it’s a risk we believe is worth taking.”

The Sudoku Professor has been in business for Since 2008. Since Day 1 it has always aimed to help people solve harder Sudoku faster and with fewer mistakes so they can find more enjoyment from the popular pastime.

This release isn’t the first time The Sudoku Professor has defied convention either. In 2008 and 2010, with their Bachelor’s and Master’s courses, respectively, they caused a stir by giving students the perfect puzzles as teaching examples to compliment the hand-held video walkthroughs inside each lesson they provide.

The Doctorate Course is set to launch April 17th, 2019. To find out more, it’s possible to visit https://sudokuprofessor.com/products

Further information about The Sudoku Professor and the Sudoku Solving System can be discovered at https://sudokuprofessor.com