The Road to Dakar – The story of Aliyyah and Yasmeen Koloc

Racers. 17 years old. Twin sisters. Their target? Compete in the 2023 Dakar Rally and become the first female twins of African descent to do so. 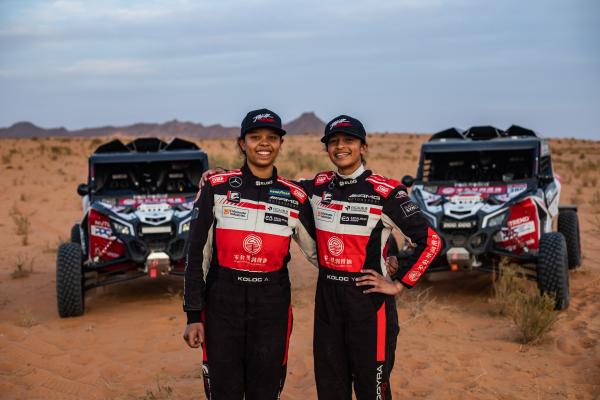 Born in Dubai in 2004, with a Seychellois mother and a Czech father, Aliyyah and Yasmeen Koloc are true cosmopolites. At just 17 they have probably seen more countries than most people do in a life time. When they were younger, they travelled the world with their father, 2-times European Truck Champion Martin Koloc and a motorsport legend in his home country. For the last three years, they have done so to pursue their dream of becoming professional race drivers.

But that wasn’t really the plan at all.

When they were 4 years old, both started to play tennis – and loved it, to the point of wanting to become professional players. “We wanted to be the next Williams Sisters. And for 10 years we put our heart and soul into it,” says Yasmeen. “We were good, played a lot of high-level national tournaments around Europe. And Yasmeen played ITF tournaments right before the end of her career,” explains Aliyyah. But then, when you think you have it all planned out, life gets in the way. At 14, Aliyyah got injured and had to stop playing tennis. A year later, the same happened to Yasmeen. The surgery that followed made it impossible to pursue a professional career for either of them.

“We were devasted at first. I had put my all into a tennis career and it was tough at 15 to admit it was over before it really had begun,” says Yasmeen. But giving up was not an option. “The girls are real fighters,” says Martin Koloc, their father, not without a bit of pride. “If we took the saying ‘If life gives you lemons, make lemonade’ literally, we’d drink a lot of lemonade in our house,” says Martin with a smile.

From tennis to motorsport

If you made a film script out of what happened next, the producer would change it with the word ‘not believable’. In early 2019, Aliyyah followed her father to a winter test and took to racing like a duck to water. “She sat in a huge 5-tonne truck and just drove. And was fast,” Martin remembers. In fact, so fast that when she took up truck racing in the French Championship that same year, she set two world speed records in the same 5-tonne truck. And won her first race in her rookie season in Nogaro. But just because truck racing wasn’t enough, Aliyyah has also been driving karts, in the ESET Cup with GT3 and GT4 and EuroNascar Series as well as some off-road rallies.

Yasmeen followed suit a year later, when it became clear that she couldn’t pursue her tennis career. The first time she sat in a race car was in March 2020 in a closed-off area just outside of Prague. “Like my sister, I loved it straight away and since 2020, I have been participating in the Renault Clio Cup and have trained a lot in a Can-Am,” explains Yasmeen. “Training paid off, as only a year later, in 2021, I won my first GT4 Race at the Autodrom in Brno in the ESET V4 Cup.”

2022 will be Aliyyah’s and Yasmeen’s Road to Dakar Year as next year, they want to compete in the 2023 Dakar Rally. At 18, they will finally be old enough to participate in this mythical event. Until then, they will continue to train hard, compete in the Middle East Championship for Cross Country Bajas, the EuroNascar Series as well as some races of the GT3 and GT4 Endurance Cup.

Competing for Buggyra ZM Racing, seventeen-year-old twins Aliyyah and Yasmeen Koloc are promising racers. After successful tennis careers that they had to stop due to injury, they took up motorsport. They have already raced a Mercedes AMG GT3 and GT4, an F4 and have tested an electric formula. In December 2021, they participated with Buggyra ZM Racing in their first rally at Baja Hail in the Can-Am category and their big dream is to participate in the Dakar Rally 2023, when they will be old enough to do so. In 2022, they will be competing in the EuroNascar Series as well as the Middle East Championship for Cross Country Bajas and some selected races of the GT3 and GT4 Endurance Cup.