Disinfecting with hydrogen peroxide-based cleaners has become somewhat of an obsession for many. This is potentially causing problems by degrading the level of air quality in the home. 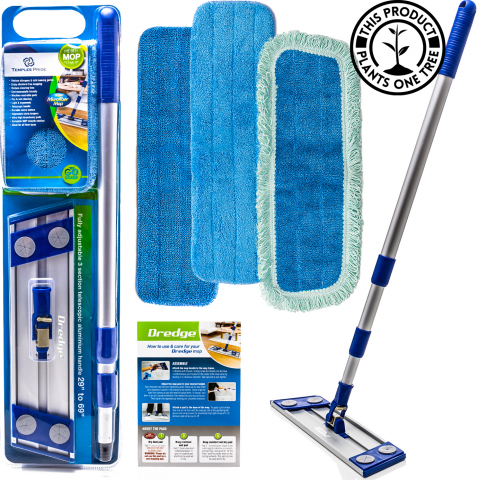 A great place to start with which will reduce the number of fumes in the house would be the floor and the way that it is mopped. The floor is the biggest surface in a home and has the biggest potential to expose and release any gases or fumes from cleaning agents. By switching to a suitable microfiber mop fumes can be reduced.

“The reason why microfiber gives off much fewer fumes while mopping is due to a few reasons, one big reason being that microfiber is able to hold up to seven times its weight in water. This drastically reduces the amount of excess cleaning solution left on the floor while cleaning thereby reducing the amount of off-gassing that can take place. Combine that with the fact that there is also no bucket of solution being exposed to the air. Lastly, the surface of the mopping material (the mop pad) is not constantly exposed to the air either, as is the case with a traditional loop mop.” Said Brian from Temples Pride, the creator of the Dredge microfiber mop kit.

The California Department of Public Health conducted a study to test which mopping method posed risk to inhalation exposure from the fumes of chemicals used while mopping. The study found that the bucket and string mop method resulted in higher air contaminant concentrations (therefore risk of higher airborne exposure) than the flat microfiber mop head method.

Another way to reduce fumes is to stop using or reduce the amount of hydrogen peroxide-based cleaners used. If looking to kill a virus, Soap is enough. “Soap breaks down a virus and degrades it to a point where it is no longer infectious.” Explains Marcus Kaul, an associate professor of biomedical sciences at the School of Medicine at the University of California, Riverside.

“The wonders of microfiber don’t stop there though,” continued Brian. “Microfiber can remove germs and bacteria even without chemicals compared to cotton that just moves germs around. You can combine that fact with some soap and you will have a powerful floor cleaning method that is safe for you, your family, and your pets. If hospitals rely on microfiber mops then doesn’t that say a lot?”