CCHR, a mental health watchdog dedicated to the protection of children, relaunched a campaign to stop the unjust Baker Acting of minors in response to the involuntary examinations of over 32,000 children across Florida in 2016. 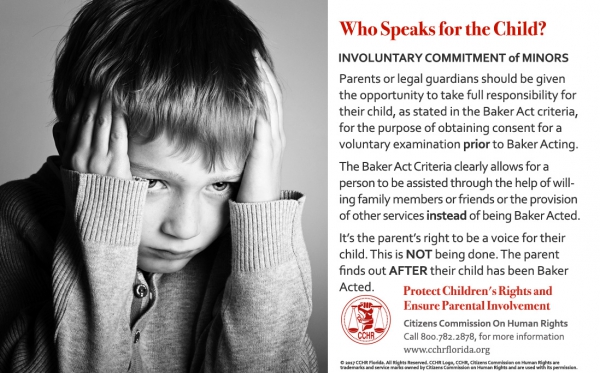 Having educated tens of thousands of Floridians on the mental health law in just over the past two years, the Citizens Commission on Human Rights (CCHR), is relaunching their campaign to protect children from unnecessary involuntary psychiatric examination

The Florida chapter of CCHR, a non-profit mental health watchdog that exposes human rights violations and is dedicated to the protection of children, applauded state lawmakers earlier this year when the mental health law was amended to afford better protection for children who have been sent for involuntary psychiatric examination. This law commonly referred to as the Baker Act, allows a child to be taken into custody and transported by law enforcement to a psychiatric facility without parental knowledge or consent. Until recently once sent, a child could be detained for up to 72 hours for psychiatric examination. The amendment to the Baker Act now requires that the initial examination to determine if the child meets the criteria to be held under the law be initiated within 12 hours after the child’s arrival at a receiving facility.

Originally launched in late 2015 with the purpose of stopping the unjust Baker Acting of children, the campaign was begun in response to the alarming number of children being sent for involuntary psychiatric examination in Florida. The original intent of the Baker Act, named after Maxine Baker, the former State Representative from Miami who sponsored the Act, was to ensure patient rights and prevent abuse, however the Annual Report of Baker Act Data, revealed in March of this year a continuing surge of minor Baker Acts with over 32,000 children Baker Acted in 2016.

“In our opinion and based on existing law, a parent should be brought into the process before something as traumatic as a Baker Act is initiated on a child,” stated Diane Stein, President of CCHR Florida. “This is not being done and we believe this is a violation of the rights of the parent and the child.”

A primary focus of the campaign is public education and since the launch CCHR has educated close to 160,000 families on their rights under the mental health law. Anyone living in Florida who is interested in protecting children from abusive Baker Acting may obtain more information on this campaign by contacting CCHR at 727-442-8820 or visiting the center at 109 N. Fort Harrison Ave in Clearwater, Florida.

About CCHR: Initially established by the Church of Scientology and renowned psychiatrist Dr. Thomas Szasz in 1969, CCHR’s mission is to eradicate abuses committed under the guise of mental health and enact patient and consumer protections. It was L. Ron Hubbard, the founder of Scientology, who brought the terror of psychiatric imprisonment to the notice of the world. In March 1969, he said, “Thousands and thousands are seized without process of law, every week, over the ‘free world’ tortured, castrated, killed. All in the name of ‘mental health.’” For more information please visit www.cchrflorida.org