The California Beach Co. donates $10,000 to wounded soldiers and veterans

The California Beach Co. donates $10,000 from their Memorial Day weekend sale to the Wounded Warrior Project. For a startup company that is less than two years old, this is certainly a generous and impressive donation. 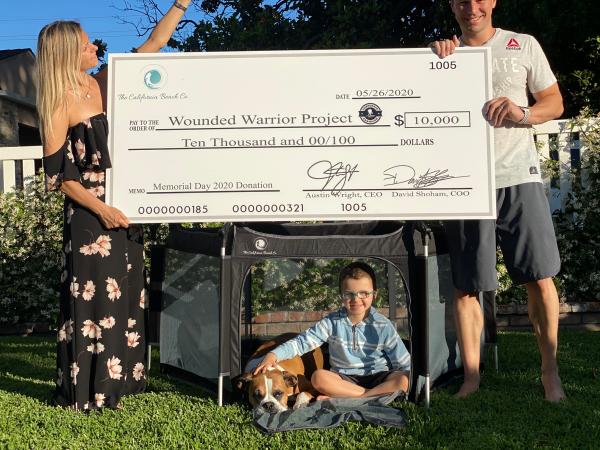 The California Beach Co. launched the innovative and patented Pop ‘N Go Playpen® on Kickstarter less than two years ago, and they’re already donating tens of thousands of dollars to charity.

The California Beach Co. announced on their blog that they have donated $10,000 from their Memorial Day weekend sale to the Wounded Warrior Project. For a startup company that is less than two years old, this is certainly a generous and impressive donation.

“We have always admired the Wounded Warrior Project and the work they do to help the families of wounded and lost veterans,” says CEO and Co-Founder of The California Beach Co. Austin Wright. “It’s an honor to be able to give to an organization that has given so much and done so much for others.”

The philosophy for The California Beach Co. is rooted in family and community. The intention of this brand was to bring practical and fully-functional products to families all over with the hopes to limit stress and frustration while creating more time for quality time.

However, the founders of this successful startup are fully aware that purchasing a top-notch playpen is not every family’s biggest concern. Some families are solely fighting to keep a roof over their heads.

For every Pop ‘N Go Playpen® purchased, a portion of the proceeds goes to a local nonprofit organization in California known as Pen + Napkin. This organization furnishes and decorates homes for families and individuals who are transitioning out of homelessness.

“Through frequent sales, IG giveaways, and affordable price points, we want to give all of our fans the chance to own their own Pop ‘N Go play tent,” says Wright. “Anyone who purchases a Pop ‘N Go Playpen® will not only be receiving the best portable indoor or outdoor playpen on the market, but they’ll also be giving back to families that need it most.”

About The California Beach Co.

The California Beach Co. was founded in 2018, and instantly became a Kickstarter and Indiegogo smash hit — raising over $500,000 in the first 30 days of operations. The patented Pop ‘N Go Playpen® is widely known as the most lightweight and portable playpen in the world — aiming to serve parents and pet owners by making unique, innovative, and high-quality products that make parenting easier. They have now expanded to multiple eCommerce channels and have their sights set on international expansion to Canada, Australia, Japan, United Kingdom, and more. Click here to shop or learn more.