Famous Nigerian Pastor - Chris Oyakhilome, who is also the head of Christ Embassy, has just concluded the 2018 Holy Land Tour. The trip was planned to present believers of Jesus across the world with the opportunity to explore the land and strengthen their faith. 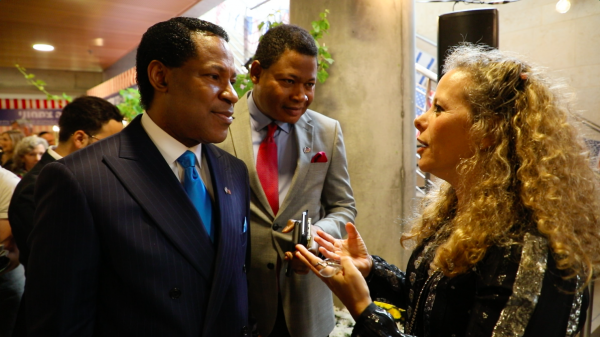 Famous Nigerian Pastor – Chris Oyakhilome, who is also the head of Christ Embassy, has just concluded the 2018 Holy Land Tour. The trip was planned to present believers of Jesus across the world with the opportunity to explore the land and strengthen their faith.

Pastor Chris Oyakhilome was joined by hundreds of his followers during the spiritual visit to Israel and Jordan. The trip featured sight-seeing and visitations to famous historical places, all relevant to the Bible and to both Christians and Jews. The tour was designed to follow the footsteps of Christ in the Bible and scripture, allowing the participants to walk in His footsteps and learn from His glory. The organization – LoveWorld incorporations was overwhelmed and expressed happiness and pride over the warm welcome they received from the Jewish community. It became evident that both Jews and Christians were delighted about the visit of Pastor Chris Oyakhilome which further proved that Evangelicals have a strong connection to the Holy Land and its people.

Moreover, the visit coincided with two events of great importance for the state of Israel. The first one is the celebration of the 70th year of independence for the Jewish Land. The second event was the move of the US Embassy from Tel Aviv to Jerusalem – the capital of Israel. Earlier this year, Donald Trump – the president of the United States of America announced his intentions of moving the Embassy. The move signaled to the international community that the USA stands behind and recognizes the Holy City of Jerusalem as the capital of the Jewish Land, Israel. In honor of the move, the Ministry of Foreign Affairs organized a celebratory reception to which Pastor Chris Oyakhilome was personally invited. The Pastor received warm welcome and was embraced by members of the government and many other members of the Jewish community. The hosts were eager to welcome the world-famous Evangelist Pastor Chris Oyakhilome to the reception. Pastor Chris Oyakhilome and the rest of the attendees of the 2018 Holy Tour travelled to numerous sites during the eight-day Holy Trip, including Caesarea, the Sea of Galilee, Abu Gosh, Mount Hertzel, and the Tomb of Lazareth. Moreover, one of the groups was also given the chance of seeing holy sites in Jordan and experiencing the diversity of the Holy Land. Participants of the tour and local observers were able to see Pastor Chris Oyakhilome minister many times during the trip. They testified that ministrations were “filled with gospel and glory, bringing all those involved closer to the Lord.”

The trip offered a lot of opportunities to the attendees and was designed to create a memorable experience. Selected moments from the 2018 Holy Land Tour are available at https://bit.ly/2I6BcRX and more information can be obtained from the blog: https://bit.ly/2rbI7UJ KingsChat application offers selected photos from the trip as well.