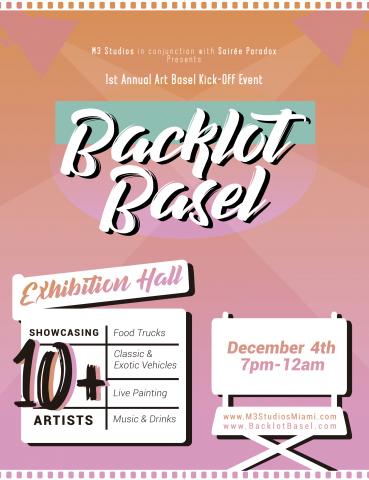 Lovers of art, film and the creative arts M3 Studios the largest independent film studio in South Florida opens its doors to the general public for a one-day event, the first annual Art Basel kick-off event done the M3 way.

“Backlot Basel” – bringing together various disciplines of creative arts in a unique festival setting, in a real working film studio.

“Backlot Basel” is scheduled for Tuesday, December 4th, 2018 from 7pm-12am. RSVP to attend by visiting www.BacklotBasel.com

Unveiling The Largest Mural By One Solo Artist – Ariel Cruz

Film Stage Is Transformed Into A Gallery Exhibition

Showcasing The Work Of 12 Visual Artist

To RSVP or for full details about what to expect at this year’s event. Interested parties can visit the website: www.BacklotBasel.com

When asked about the reasons behind creating this event, the host of the event, Henry Cedeno said:

“I’ve been working with M3 Studios for years, it amazes me the talent and film projects that comes through the facility. From up and coming artist to world renowned Grammy award winning artist. From reality tv shows to big commercials. It’s only fitting that a facility that is known for producing creative content also gets involved in Art Basel, but staying true to its roots of being a Television & Film Studio. So you can expect plenty of art but also things you never get to see anywhere else.

The fact that the general public never gets to set foot in the facility makes this event unique as it will give people the opportunity to see the inside of a real working film studio as well as some interesting film props and sets.”

When asked about her thoughts behind exhibiting at “Backlot Basel”, Lisa Camero an emerging artist said:

“Tons of creative talent have been at M3 Studio, to be surrounded by such creative energy is incredible. The fact that M3 Studios would open their doors like this is amazing. Not everyone gets a chance to set foot in a real film studio, the whole concept of the event is amazing. I hope to be a part of it every year”