Privacy booth offers IT employees at the University of Notre Dame a getaway within their open-space work environment. 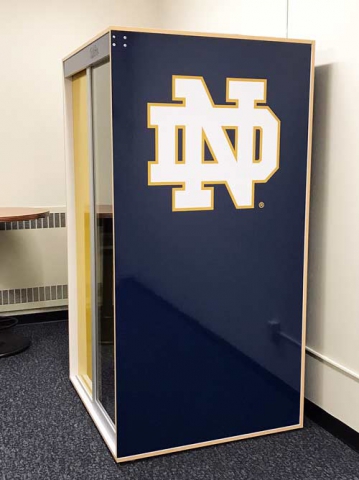 TalkBox, a privacy booth company based in Boulder Colorado, has added the University of Notre Dame to its growing customer list. The university contacted TalkBox after employees in its Office for Information Technology complained about not having a place within their open-space work environment to take important personal phone calls, talk to vendors, or connect privately with others across campus.

Adam Hill, a Facilities Administrator at the Notre Dame Office for Information Technology, said, “They would get a call, and sometimes they just had to let it go. They couldn’t get away from what they were doing and missed important calls from family, doctors, medical, or whatever it may be… And so they would try to find these little nooks and crannies in the building that were enough privacy, but it was never 100 percent private because it’s a very active building.”

Adam continued, “We’re very pleased with the results [of the TalkBox] and the way it looks, and the way it feels inside of our space. It’s a lot roomier than I thought it would be. I’ve already had comments on [how] the soundproofing inside is excellent.”

Hill mentioned the university might also be interested in exploring a two-person unit at some point in the future, as a place where employees can hold private one-on-one meetings. Stadiums and libraries are just a few of the places he said he hopes to see TalkBoxes in the future. The University of Notre Dame purchased a branded blue and metallic gold unit with the school’s monogram on the side.

About Red Idea LLC: Red Idea LLC is an innovation consulting and ventures firm based in Boulder, CO. Founded in 2008, Red Idea has worked with companies in various industries, but especially in consumer products and the natural/organic food and beverages space. The firm also develops and launches its own ideas with strategic plans for future growth and invests in a portfolio of promising growth-stage companies. Learn more at RedIdeaPartners.com.