Reports of babies and toddlers being given mobile phones and tablets as comforters while their parents shop at the mall have horrified Australian optometrist Gary Rodney. 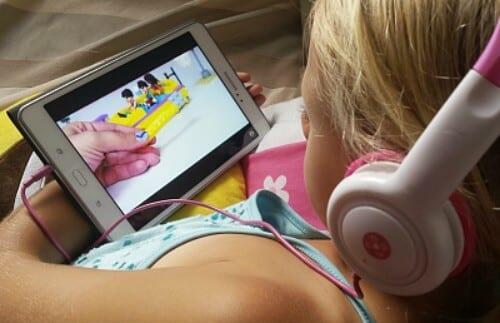 Reports of babies and toddlers being given mobile phones and tablets as comforters while their parents shop at the mall have horrified Australian optometrist Gary Rodney. A fellow of the International Academy of Orthokeratology and Myopia Control (FIAOMC), founder of Smart Vision Optometry and activist in the fight to flatten the curve of the global myopia epidemic, Rodney attributes this behaviour to the absence, and sometimes misleading, nature of available information on this eye condition which can affect children’s eyesight and also their ability to learn.

Rodney said the reports speak of phones and tablets braced against hands too small to hold them, and with cartoon-streaming digital devices placed in pushchair pockets close to tiny faces.

Rodney says he does not “blame” parents for doing this. Instead he believes it is the result of a lack of awareness on many Australian parents’ part regarding how babies’ and children’s eyes develop in the first months and years of their lives, and the importance of protecting their children from becoming part of the statistics that indicate myopia will affect half the world’s population by 2050.

Rodney says exposing babies to screens could unintentionally increase their chances of becoming myopic. Lack of time spent outdoors and too much screen time are two links identified by studies as having possible ties to the development of this treatable but incurable refractive eye condition. This has led to the American Academy of Paediatrics recommending that children under two years old should not watch screens at all, and older children should be limited to around 2 hours a day.

He said babies in prams or pushchairs are extremely vulnerable as their eyesight is still developing, and will continue to do so at least until they reach their third birthday. Newborn babies are shortsighted and unable to see further than a foot (30cm) away, without what they’re seeing becoming blurred, even if that happens to be their parents. This nearsightedness will normally disappear as the baby’s eyesight develops, but not in all cases.

An Eyesight Threat Not Just an Inconvenience

Near or short sightedness are the layman’s terms for myopia, Rodney said, labels which do not sound serious or threatening, and can often be misunderstood to be an inconvenience which can be fixed with a pair of glasses.

“These terms don’t paint a true picture of myopia and how it feels to see everything that’s more than a few feet away as a blur. It can leave a feeling of confusion in children who come to realise they cannot see, or interpret what they are seeing, as others do. For them a blur is a blur, whether it’s actually a tree, a mountain range, or even the family pet playing in the backyard.

“Their vision is trapped where it was when they were babies in prams and pushchairs. Only now, they are not babies developing their eyesight, but children having to learn about, and react to, a world around them in a world where their eyesight has not developed in the same way as their peers’. When they go to school they are expected to assimilate information, most of which is presented in the form of images some distance away, and is often nothing but a blur to them. This can impact on performance at school,” Rodney says.

The Importance of Myopia Treatment

Unless the right treatment is given, the eye impairment can worsen progressively until children reach their late 20’s when it usually levels off. And later in life can become a serious eye problem which can lead to blindness.