Stephanie Gomez, ‘Made In America’, Just One Step From An Emmy

Stephanie Gómez is a 25-year-old editor from Carballo, Spain, and this Saturday she could win an Emmy as part of the team that created 'Made in America', a film that showcases a family of Latino origin that emigrates to the United States. 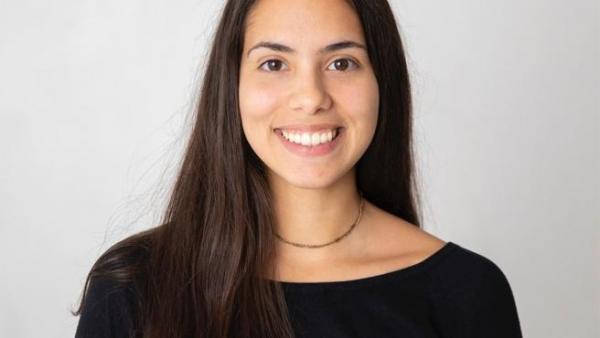 Stephanie Gómez Vieites is a 25-year-old film professional from Carballo, Spain (A Coruña), and this Saturday she could win an Emmy award as part of the team that created ‘Made in America’, a short film that showcases the experience of a family of Latino origin that emigrates to the United States. To see more of Stephanie’s work visit her online portfolio. This work will compete in a local version of the Emmy Awards – along with other projects. After its broadcast, last January on the Georgia Public Broadcasting (GPB) public network in Georgia, ‘Made in America’ has already added several awards and nominations to its track record, including three Telly Awards for best direction, best screenplay, and best social inclusion work.

Stephanie Gómez was born in Venezuela, her Grandparents emigrated to the Latin America Country from Spain. Stephanie studied Audiovisual Communication in Pontevedra, Spain, and received a scholarship to do her third year in Atlanta, Ga. Back in Galicia, she worked for a summer to be able to return to the United States once she finished her degree. Stephanie was able to extend her stay beyond her original three-month tourist visa, thanks to landing a job in an advertising agency. She continues to work remotely from Galicia for another American agency. During her stay in Atlanta, she met Producer Arlahna Lark and Salvadoran Actress and Director Armida López, who was recruiting an all-woman team to work on ‘Made in America’.

This Saturday, in a Gala broadcast from 7:00 p.m. to 1:00 a.m. in Spain -, beating out three other short-films in the Arts and Entertainment category, would spell an Emmy win for ‘Made in America’, Stephanie Gomez and the team that helped make it a reality. “In Galicia, we see everything that happens abroad, how everything is outside and we believe that these things do not happen here, but that’s not true,” says Stephanie Gómez, in an interview with Europa Press one day after the nominees were revealed.

For Stephanie, this is proof against the idea that Galicia “is small”, that there is “little room” for audiovisuals. It was her University in Pontevedra, Spain that gave her the opportunity through the scholarship. Stephanie continues, ” … we all had access to that,…I wasn’t even the best in my class.”

For Gómez, making her experience visible and the award her project could receive on Saturday means creating references for the new generations in Galicia: “If I had seen this when I was growing up, I would have been very inspired to know that there is a Galician there “.

She was the first on the team to learn of the Emmy nomination. She received the news one Sunday night at home in Carballo, through an ’email’ that had a 126-page PDF attached. When she managed to find her short between all the pages, she was with her mother.

“We were watching TV and I told her: ‘Mom, they’ve nominated me for an Emmy’; and she didn’t believe me, but at that moment I started crying and called Armida (the director of the short film) and then she believed me. Nobody believed me from my friends either, they thought it was a joke until I posted it on my social networks, “Stephanie tells Europa Press. After learning the news, she couldn’t sleep for three nights.

‘MADE IN AMÉRICA’, ONE STEP FROM EMMY

In ‘Made in America’, Armida López reflects her own story and how her mother had to leave her country of origin and settled in Atlanta without work and without money until a doctor gave her the opportunity to work in a hospital. For Gómez, this short film is worthy of an Emmy because it “reflects the real version” of immigrants in the United States, who are seen as “second-class citizens.”

“We tend to think of the immigrant as someone who comes to your country to take your job. But it is the opposite, they are people who come with the hope of giving their children something better and then find social rejection”, explains Stephanie, who was in charge of the post-production of this short film that had a modest budget. In addition to the message, Stephanie considers the fact that the team responsible for this project being made up of “black women and Latino women” as “very innovative”. After working on several sets mostly male-dominated, Stephanie considered that this time the environment was “different”. “Everything was filmed and communication was much easier. I felt the difference and I had a great time.”

In short, Stephanie emphasizes that ‘Made in America’ deserves the Emmy “for the visibility of both immigration and women in the audiovisual world.”

THE EMMY, “THE PROOF THAT EVERYTHING WAS WORTH IT”

Stephanie worked for a month on editing, mostly on Saturdays and Sundays, because she worked during the week. “On ‘weekends’ I would meet with the director and we would edit it together,” she explains.

Winning the Emmy with the ‘Made in America’ team would be a great help professionally. “It would mean the beginning of a second part: knocking on all the doors again and going for what I want,” she says. This award would show that everything she has done to get here “was worth it”. “It would be proof that everything has been worth it, of everything I have tried and done to get there.”

For more information or to get in touch with Stephanie Gomez see below: