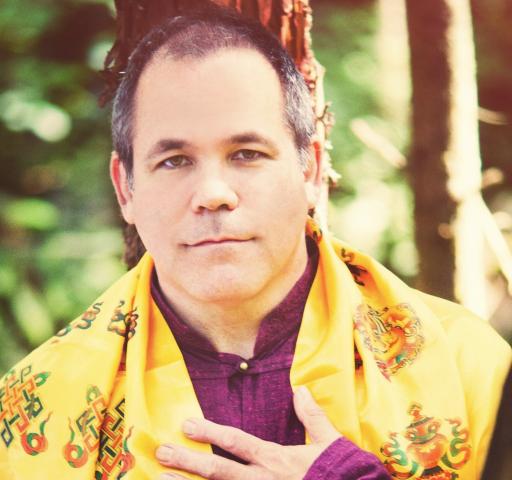 Dr. Joe Dispenza has worked with some of the top sound healing and meditation music artists in the world, including Grammy award winners Barry Goldstein and Jonathan Goldman.

A global leader in self improvement and healing through meditation, Dispenza has a new “secret weapon” to enhance his guided meditations: Canada based “Cosmic Throat Singer” Matthew Kocel.

“Matthew Kocel’s music is so primal, so rich and beautifully soulful…” Dispenza says, “It touches us on a deep level that opens our hearts.”

Participants at Dispenza’s meditation retreats have been feasting on Matthew Kocel’s music since 2016. Recently Dispenza signed a licensing agreement to deploy Kocel’s songs “Grace” and “Labyrinth” for his recorded meditation programs.

As yet undiscovered by music industry insiders and mainstream media, Matthew Kocel has been serenading audiences around the world over the last two decades.

The relative anonymity hasn’t slowed him down.

Performing in a diverse selection of venues from domes, caves and yurts to planetariums, yoga studios, churches and ancient Inca temples, Kocel is clearly a man on a mission.

In 2019 alone his musical travels carried him from Western Canada and the Pacific Northwest to Colorado, Texas, New York, Belgium and France.

He seems to relish the role of renegade musician working outside of the mainstream.

“This music is so hard to categorize” Kocel says, “I can understand why it hasn’t been promoted by the music industry or press…But the effect it has on anyone sincerely willing to give it a deep listen is consistent and undeniable.”

Audience testimonials of extra-ordinary experiences while listening to his music have been well documented online.

If you’re curious, Matthew Kocel is offering “3 Days of Healing Music” for free at https://OmShaman.com.

The title track to his third album Song of the Ancients goes live on Spotify, Apple and all streaming services April 16, 2021. Access to this entire groundbreaking album is exclusively available to people in his email or social media community.