The Sudoku Professor has added new free videos offering tips, tricks, and techniques to help players of all skill levels get unstuck when solving Sudoku puzzles of any difficulty. 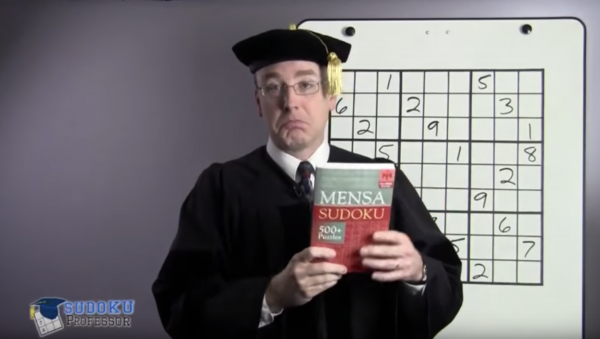 As people around the world search for ways to entertain themselves during social distancing, Sudoku Professor has begun adding lessons from their private member library to be available for free on YouTube.

A recent video added to the channel titled “Getting Unstuck from Your Sudoku Puzzles” includes tips for players who are learning the game and find themselves unable to move further while solving these popular puzzles.

“We have noticed a huge increase in people signing up for the lessons and courses on the website,” said Chad Barker, popularly known as The Sudoku Professor online. “It just made sense to update the [YouTube channel] with content for people looking to get into the game.”

The videos contain solving advice and strategies that have helped more than 150,000 online students of the programs according to the company’s Facebook page.

Sudoku is a popular game that involves using the numbers 1-9 in unique arrangement across a series of 9 lines and 9 columns comprising 9 boxes of 9 squares each.

During social distancing, the game provides a form of entertainment and mental challenge while staying isolated or at home.

The puzzles are rated on a difficulty scale using names that vary by publisher and website. Typically, easier puzzles provide more numbers at the beginning of the puzzle and involve simple logic to solve.

Harder puzzles, however, can leave players stuck and unable to fill in more spaces, essentially forcing the player to either give up on the puzzle or to look up solutions from a cheat sheet.

“Getting unstuck is one of the most common problems for players of any skill level – from beginner right up to the most advanced players on the planet. Sudoku is a game that can be a lot of fun and very challenging at the same time,” said Barker.

Added the Professor, “Not only have we had a flood of new students to the website, our existing students have chosen to add new courses to their memberships and [the company’s subscription club] has seen lots of new members join.”

For more information about The Sudoku Professor and the courses, interested readers may visit: https://SudokuProfessor.com