Šoltys and A. Koloc chased each other on the rocky sections and in the dunes

On the eighth stage of the Dakar Rally, the Bugygra ZM Racing crews successfully completed the second part of the demanding marathon stage. Valtr prefers to keep racing instead of taking time off. 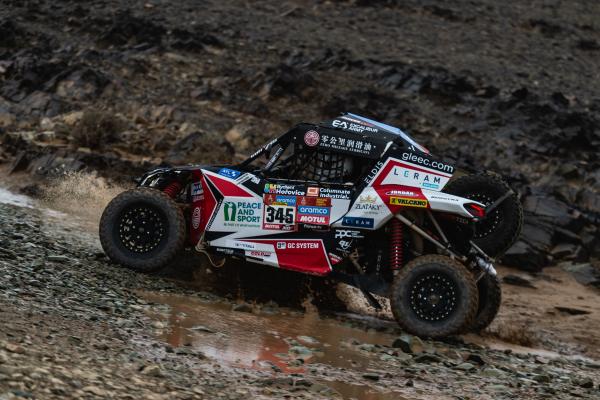 Martin Šoltys in the Tatra and Aliyyah Koloc in the Buggyra Can-Am DV 21 raced each other on the route from the temporary bivouac in Duwadimi back to Riyadh, both of them thoroughly enjoying the duel.

Tomorrow, all Dakar participants will have a well-deserved day off, followed by the second half of the competition. After the first half, Jaroslav Valtr is in sixth position overall after today’s 11th place. Martin Šoltys finished today’s stage 8th and he is now 7th overall. Róbert Kasák was 19th after 346 km of the special stage, making him 20th overall. Josef Macháček is just outside the top ten in the T3 – Light Prototypes category, in eleventh position after his 20th place on the stage today. Aliyyah Koloc finished two positions higher than the Dakar doyen today, and is currently 35th overall. In the Dakar Classic standings, Radovan Kazarka remains third in his category, having finished fourth today.

Martin Šoltys and Aliyyah Koloc battled it out on the rocky sections and in the dunes. “In the dunes, Aliyyah got away from us, she is skilful in that type of terrain and drives beautifully. On the hard pistes, the truck goes faster, so we got in front of her again,” described the pilot of the Tatra 815 the small team fight.

“We had a great drive. We were just a little bit limited by the fact that the shock absorbers fell off yesterday, so it’s still not an easy ride. But the stage was amazing, with beautiful dunes. The way we lost yesterday, we overtook a lot of Can-Ams today. I’m looking forward to the day off. I’m especially looking forward to getting the truck back in shape. It is clear that the Dakar is hard and a week on the ground shows on the truck. The Tatra needs care and love,” added Martin Šoltys at the end of the stage.

Jaroslav Valtr had to complete the entire timed section on only five cylinders. Even so, he was able to drive at full throttle most of the time. “After yesterday, I wanted to go for the win, this track suits the Tatra. But after a hundred meters at the start, the truck stopped working. I knew right away that we were going on five cylinders only. After the technical parts, there were the dunes where we had to drive carefully. We did an extra 10 to 15 kilometers as we were going around all the steep exits. I didn’t have the courage to go up on them with the truckas I was worried we might get stuck on the side somewhere. The last section of today’s stage was rather fast. Even though we were still driving as fast as we could, despite the bumpy sections, unfortunately the time loss is big,” explained the Tatra Buggyra ZM Racing driver. Unlike most of the other Dakar participants, the Tatra Phoenix driver is not looking forward to the day off. “I’d rather keep going,” Jaroslav Valtr said with a laugh.

“We had a burst valve, so the engine didn‘t exactly sound like a Swiss watch. But it’s unbelievable, we survived 346 fast kilometers . And we still had an unbelievable pace,” praised Valtr’s mechanic Tomas Sikola the endurance of the Gyrtech engine.

Aliyyah Koloc did not only enjoy the chase with Martin Šoltys today but the whole stage. “The track was rocky and sandy with dunes. The stones didn’t suit me as much as usual. I had to be careful not to get a puncture, so I drove carefully. Some of the dunes were really difficult. On the track, we were fighting with Martin Soltys. The Can-Am versus the truck was a lot of fun. In the dunes, we were driving next to each other but then he got held up and I got away from him. Today, we had no issues and didn’t have to stop anywhere,” the Buggyra ZM Academy driver described her Sunday. “I’m really looking forward to the day off. I’ll probably sleep in, then I have some interviews coming up,” she said with a smile.

Veteran Josef Machacek was glad that his crew made it to the bivouac in one piece, and can spend the day off carrying out a thorough overhaul of the Buggyra Can-Am DV 21. „Today was about sand pistes and big dunes. It was beautiful to drive there. The second half after the neutralisation was rocky. Big stones,difficult sections. Everybody was driving carefully. The end of the stage was high-speed and beautiful to drive. We wanted to finish in daylight, and we did. For me, the day off is more about taking the buggy apart and doing more work on it, checking as many items as possible. It’s not about my body because I’m absolutely fine,” explained the six-time Dakar champion.

In the Dakar Classic, the Tatra Puma driving by Radovan Kazarka proved its robustness once again. “The two parts of the marathon stage are quite similar. The track was fast, there was no shortage of gravel, rocks, and mountain ranges. It went well for us, only the crossings were tiring. We tried to maintain our position but it was very difficult to navigate. I hung on to the Spaniard today. We do everything manually, they have digital devices. So we were chasing each other. The Tatra works well too, there seems to be somethingwrong with the turbo, we‘ll need to look at it. Also, the gear shifting is a bit difficult. But tomorrow is a day off, so we will fix the truck and continue on Tuesday,” explained the Slovakian driver.