The 5th annual Carve 4 Cancer fundraiser that brings awareness to the fight against blood cancers will be held at Blue Mountain Resort in Palmerton, Pa., on Feb. 3, 2018. Snowboarder Brent Evans started the event before losing his life due to blood cancer complications. 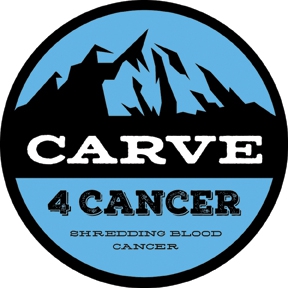 Brent Evans, with the help of friends and family, created the charity and the Winter Festival fundraiser in 2012 after a two-year battle with a rare and aggressive form of non-Hodgkin’s lymphoma. What started as a small, winter fundraiser in the Pocono Mountain region, is now a full-scale 501(c)(3) non-profit corporation raising tens of thousands of dollars with multiple campaigns, sponsors and supporters nationwide.

Brent was an avid snowboarding enthusiast and outdoor lover. He believed a winter festival with live indoor and outdoor concerts, snowboarding competitions, art installations, and great food and drink would serve well to create a fun, boisterous event. It would draw plenty of guests willing to help a worthy cause and have some fun at the same time, he thought.

Mr. Evans was right. The winter festivals have been held each year since 2012 and the February 2017 festival was the most successful yet. The event had sponsors including Milwaukee Tool, K2, Gilson Snowboards, Tito’s Vodka along with many others.

Thousands from throughout the northeast attended the event. Sadly, Carve 4 Cancer 2017 was Brent’s last as he passed away due to complications from the disease in July 2017 at just 33 years old. Importantly, his legacy lives on with the help of close friends and loved ones who sit on the board of the non-profit charity. Also, after his passing the hashtag “#LiveLikeBrent” was created to commemorate how Brent lived life to the fullest, and people have been sharing their moments.

“Brent was a very close friend to me, as he was to so many others,” said Josh Frank, a lifelong snowboarder and Carve 4 Cancer Marketing Director. “He had an electric personality. This charity is his legacy and his longtime friends and colleagues are dedicated to seeing his vision through, and finding a cure for this horrible disease.”

Frank said Blue Mountain Resort will be ideal for the fundraiser given its amenities and proximity to metropolitan areas such as Philadelphia, Harrisburg, Lancaster, Wilkes-Barre/Scranton and Trenton.

The venue is celebrating its 40th anniversary next year and is home to 164 acres of skiable terrain. The resort boasts the highest vertical drop in the state at 1,082 feet. In addition to 39 ski trails, 16 lifts and 39 tubing lanes, it maintains a full-service mountain top restaurant.

“Our mission is to get people outside and give them reasons to keep coming back,” said Melissa Yingling, marketing specialist at Blue Mountain Resort. “Partnering with an organization like Carve 4 Cancer not only brings awareness to outdoors sports, but also to a cause created by an outdoor enthusiast.

Frank noted that 100 percent of the board members and volunteers for Carve 4 Cancer are unpaid and that all funds raised go to making a maximum impact in fighting blood cancers.

Dr. Andrei Shustov, M.D., is one of the main recipients of the donations from the various Carve 4 Cancer events. He is performing groundbreaking research in the field of Hepatosplenic T-Cell Lymphoma, the rare form of leukemia contracted by Mr. Evans.

“Understanding the disease is the first step to finding a cure,” Dr. Shustov said. “The funds from Carve 4 Cancer will support this very important research, and we would like to thank Carve 4 Cancer for their very generous donations.”

Aisling Carroll, Brent’s girlfriend and Carve 4 Cancer board member, said she is so proud his legacy is thriving.

“During Brent’s cancer journey,” Carroll said, “he would periodically ask me, ‘What if I don’t make it and what happens when I’m gone?’

“I’d tell him we weren’t close to crossing that bridge and to not worry about it. Losing him so suddenly was traumatic.

“When he was sick, he was excited for Carve to be rolling into its fifth year but worried about not being able to make calls or meetings. I’m happy to say and tell Brent right now, he still doesn’t have to worry. The team and I are going to blow this year’s festival out of the water, and carry his legacy along for the ride.”

One of the main events during the 5th Annual Pocono Mountain Carve 4 Cancer is the Rail Jam. The snowboarding and ski competitions draw talent from across the region in Men’s, Women’s and Grom’s divisions. Thousands of dollars worth of prizes will be up for grabs. Carve 4 Cancer will soon announce 10 bands and musical guests, sponsors, on mountain vendors, and thousands of dollars in raffle prizes.

“As a two-time Hodgkins survivor and 12-year ski patroller, I couldn’t be more proud to help contribute to the cure of this devastating disease,” said Carve4Cancer board member Fletcher Moppert. “With the continued support of our loyal fans, supporters and dedicated doctors we fund, C4C will someday soon shred blood cancers for good.”

“I’m thrilled to see us making larger and larger direct donations to doctors making a difference,” Ferrara said. “It’s proof that our mission to engage the snow and board sports industry while creating impactful and entertaining fundraising initiatives is working.”

Carve 4 Cancer https://www.carve4cancer.com a non-profit dedicated to the mission of shredding blood cancers through extreme sports events and fundraising. Carve was founded by East Coast shredder and blood cancer warrior, Brent P. Evans. In 2010, Brent was diagnosed with stage IV hepatosplenic t-cell non-Hodgkin’s lymphoma when he envisioned a snowboarding event to raise funds to shred cancer. He passed away in June. The team is planning the 2018 event while expanding the organization.