Children’s Books for Kids Who Care, a series of non-fiction books from author Carol Perkins, is educating young readers about the important role of sharks in the ecosystem through ‘Sharks: Ocean Rescue Squad’. 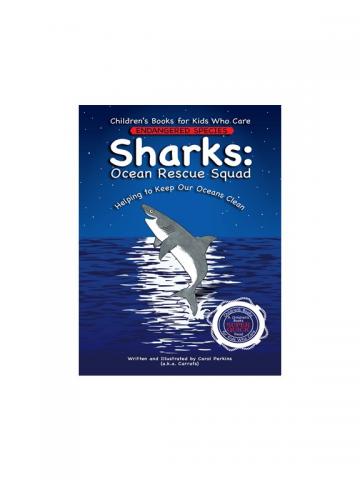 Children’s Books for Kids Who Care has been developed to offer important and entertaining facts to children about endangered species, and the planet’s ecosystem.

More information can be found at https://www.childrensbooksforkidswhocare.ca

This latest edition of the book is now available in a number of digital formats, including Kindle. Customers can purchase it directly from the author’s official site or through Amazon.

The series from Carol ‘Carrots’ Perkins takes complex topics that children are interested in and breaks them down into a format that makes them easier to digest. The topic of the first book in the collection, ‘Sharks: Ocean Rescue Squad’, was carefully chosen by Perkins after she saw a number of documentaries on the subject of sharks and learned that her nephew’s son was also a big fan.

The book focuses on the often misunderstood species and their endangerment as a result of human actions, and the state of the ocean’s ecosystem. Perkins whittles down the complex ins and outs of the subject so that they are easier to understand and retain.

Further details are available at https://www.pinterest.ca/childrensbooksforkidswhocare

Diving into the topic, the book examines the importance of sharks in the food chain of the ocean, and explains to kids how they are actually incredibly important for helping to keep the ocean clean. Perkins also highlights the awful circumstances that have led to the decline of sharks in the ocean and their resulting status as an endangered species, including human interference for such purposes as fishing and the sale of shark fins.

‘Sharks: Ocean Rescue Squad’ has been developed for kids at grades 4 to 7, and has been intentionally written by Perkins in a way that doesn’t include intimidating blocks of text, or a range of complicated and confusing words. Further, the author has also included a number of fun illustrations to accompany the key facts, and uses an entertaining narrative between the Ocean Rescue Squad and Carrots herself to add emphasis in places.