Sukhrab Karimov, a Los Angeles business owner, is very concerned that Rohingya refugees who have fled to Bangladesh find themselves in dire need of medical and humanitarian assistance, as an already appalling situation along the border with Myanmar intensifies. He has established a relief fund. 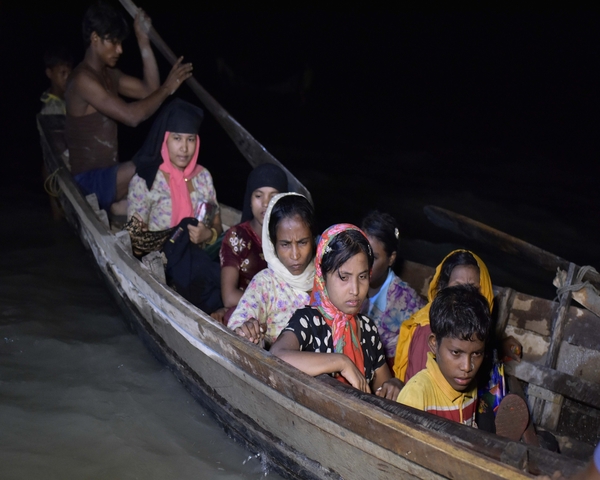 Sukhrab Karimov, a Los Angeles business owner, is very concerned that Rohingya refugees who have fled to Bangladesh find themselves in dire need of medical and humanitarian assistance, as an already appalling situation along the border with Myanmar intensifies.

Take a moment to envision a dear friend on vacation… He rises in the morning to the smell of his favorite breakfast; dashes to the kitchen, beaming with anticipation before collecting a meal and sprinting outside to play with friends and family. Only to be awakened by the harsh reality- those friends, that food, and his community no longer exists. They have all been obliterated by fire and shrapnel in the wake of a genocide that he neither caused, nor can he cure.

As a member of the Rohingya living in Myanmar, this truth rings louder and louder with every bomb dropped from above; forcing families to live on the run, seeking refuge from the only land they call home.

Regarding an accurate account of this devastation, estimates of the Rohingya death toll vary: the Myanmar government claims about 400 people have been killed so far, though others say the number is much higher (The UN estimated on 7th that 1,000 had been killed). Bangladesh’s foreign minister, AH Mahmood Ali, said unofficial sources put the death toll at about 3,000; more than 310,000 people had fled to Bangladesh by September 11th. Many who made it to the border walked for days, hiding in jungles, crossing mountains and rivers, often times becoming sick and or even receiving bullet wounds.

Sukhrab states, “Our true religion is kindness, so let’s not lose faith in humanity.”

Aid agencies have warned of a growing humanitarian crisis in overstretched border camps: where water, food rations, and medical supplies are running out of stock. Most refugees are now living in established camps, makeshift settlements, or sheltering in host communities. Nearly 50,000 are in new spontaneous settlements that have sprung up along the border (where access to services is especially limited).

There are also fears for Rohingya people trapped in conflict zones. On September 4th, the UN said its aid agencies had been blocked from supplying life-saving supplies such as food, water, and medicine to thousands of civilians in the northern Rakhine state.

These heartbreaking statistics reveal the barbaric nature of the largest modern-day genocide in the world. Now is the time to lend support here where everyday people are working around the clock to provide aid, assistance, and practical relief to the Rohingya who are being systematically exterminated in their homeland.