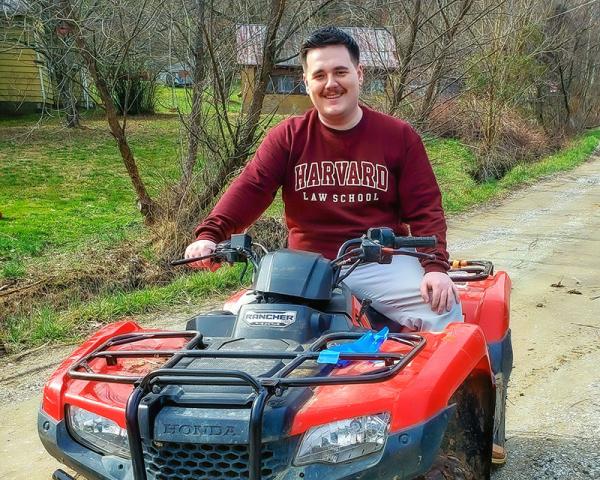 Riverside, CA— Award-winning Southern California personal injury and employment lawyers Greg Rizio and Daren Lipinsky have announced that J.R. Hamilton, a first-year law student at Harvard Law School has been selected as the winner of the 2020 Rizio Lipinsky $10,000 Law Scholarship. Hamilton was selected as the winner out of nearly 800 current and future law student submissions.

The firm recently announced the winner of this year’s award on the company’s blog. According to Greg Rizio, Co-Founder and Senior Trial Attorney at Rizio Lipinsky, the number of applicants this year were more than triple the number of scholarship applicants last year. “We were blown away by the response to the law school scholarship this year. Amid a global pandemic, and great uncertainty regarding the future, more than 750 future attorneys took the time to explain why they are passionate about the law, and how they plan to use their voices to ensure justice for others is served. Reading these essays, gave us incredible comfort in knowing that the next generation of legal advocates in America is going to be passionate and fearless in fighting for others.”

The passion for setting wrongs right was particularly apparent in scholarship winner J.R. Hamilton’s essay. Reflecting upon his father’s death from an overdose, Hamilton makes clear that he intends to pursue justice for others through impact litigation. In his essay, the West Virginia native, and graduate of West Virginia State University detailed the devastation occurring in Appalachia as the result of millions of prescription painkillers arriving from Big Pharma to small towns throughout the region.

Hamilton wrote, “Appalachia is hurting, and I want to help it in every way I can. I am proud to be from here, and I have a love for these people – my people – unlike anything I have ever felt before. Those who are able, oftentimes our best and brightest, are fleeing the state en masse, never to return, leaving behind those who cannot, to die with the state. We do not deserve this, and in my lifetime, I want to see a world in which we not only stop suffering but begin thriving. A thorough knowledge of the law can make me the best version of myself in preparation for doing everything I can to come back home and see my dream become a reality.”

Hamilton’s efforts to raise awareness about the epidemic of opioid addiction included volunteer work as an undergrad with organizations including Help4WV and West Virginia State University’s CHOICES Peer Educators.

At Harvard Law School, Hamilton plans to join the student association First Class, a student-run inclusive and intersectional organization for first-generation college students and students from low-income backgrounds. He also aspires to sharpen his legal writing skills by contributing to one of the school’s law journals. Hamilton began his first semester at Harvard Law School remotely on September 2, 2020.

“J.R.’s passion, ambition, and tenacity were evident in his essay,” says Rizio. “Against significant economic odds, and amidst terrible personal loss, he didn’t become a victim of adversity. Instead, he appears to be using his personal struggles for the benefit of others, which is inspiring. Our team at Rizio Lipinsky is honored to be able to help remove a bit of the financial burden of attending law school so that J.R. can focus on becoming the advocate for the downtrodden that he aspires to be. We are excited to see J.R. make a significant impact in the legal field in the years to come.”

Rizio Lipinsky is an award-winning California Consumer Law Firm that has recovered hundreds of millions of dollars for victims of personal injuries, workplace injustices, and discrimination. More information about the firm can be found on their website.

Greg Rizio is one of the most successful and influential personal injury lawyers in Riverside, California, especially in his role as a Riverside car accident attorney and truck accident lawyer. Rizio secured the largest ever plaintiff’s verdict in Riverside County, at nearly $58 Million. This victory in 2014 was the #1 verdict in the State of California, and the 10th largest verdict nationally. As a result, Rizio was awarded the industry’s “Litigator’s Award,” which is given only to the top 1% of attorneys nationwide.

Daren Lipinsky is an award-winning employment attorney who was instrumental in assisting in the passage of SB820 barring secret settlements in sexual harassment and sexual assault cases. Specifically, Daren testified before the Senate Judiciary Committee at the request of Senator Connie Leyva and the Consumer Attorneys of California (CAOC) regarding the bill. Daren has been named a “California Whistleblower Attorney of the Year” and is a leading disability discrimination lawyer. Rizio Lipinsky law offices are located throughout California, including Riverside, San Bernardino, and Orange County, California.