On Jan. 27, CCHR Florida and the Church of Scientology of Tampa hosted a commemoration event for the International Holocaust Remembrance day. 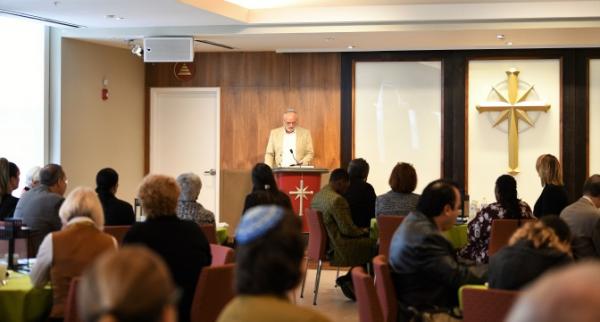 The Citizens Commission on Human Rights (CCHR Florida), a non-profit mental health watchdog organization that protects human rights in the field of mental health and fights psychiatric abuses, hosted a community event at the Church of Scientology of Tampa, Ybore square, on Monday, January the 27th, to commemorate International Holocaust Remembrance Day.

CCHR Florida invited public as well as local religious leaders. This annual commemoration has the purpose to pay respect to victims of the Holocaust and also to spread awareness about psychiatric influences that resulted in the murder of over 6 million Jews and others between 1933 and 1945.

Reverend Martha Stilson from the Church of Scientology of Tampa, emceed the event. She explained that the International Holocaust Remembrance Day represents the official United Nations anniversary of the 1945 liberation of 7,000 prisoners from the Nazi concentration camp, Auschwitz-Birkenau, located in Poland.

Judy Bechar, internationally-recognized Israeli singer, performed “Somewhere Over the Rainbow,” followed by an introduction of Bennie Godesh, a Scientologist and Israeli immigrant who read the Jewish prayer for the dead in English and Aramaic.

Several Tampa religious community leaders spoke, including Senior Pastor Adam Grey of New Thought Baptist Church, who told the history of religious freedom in America. Reverend Linda McLeod of Unity Temple of Truth spoke about the importance of moving forward into the future after tragedy. Pastor Felice Kakure, of Christian Center Pinellas and a refugee from Central Africa camps, spoke about religious persecution including his personal experiences of being imprisoned.

Diane Stein, President of CCHR Florida, shared the connection between psychiatry and the Holocaust abuses that caused the mass genocide of most of Europe’s Jewish population under the leadership of some of Germany’s esteemed psychiatrists. She explained the origin of CCHR, which was founded in 1969 by the Church of Scientology and Dr. Thomas Szasz, Professor of Psychiatry, to combat the post-WWII rise of mainstream psychotropic drugging, institutionalization, physical restraints on patients and electroshock treatments.

“The Nazis killed millions.” Stein said. “Their justification was psychiatry and psychology’s theory of eugenics—that certain people were inferior and should be exterminated and their kind bred out of the race. These architects of the Holocaust were never brought to justice.”

For more information on psychiatric abuses or obtaining educational materials for yourself or an organization, please call CCHR Florida at 727-442-8820, or visit www.cchrflorida.org.

About CCHR: Initially established by the Church of Scientology and renowned psychiatrist Dr. Thomas Szasz in 1969, CCHR’s mission is to eradicate abuses committed under the guise of mental health and enact patient and consumer protections. L. Ron Hubbard, founder of Scientology, first brought psychiatric imprisonment to wide public notice: “Thousands and thousands are seized without process of law, every week, over the ‘free world’ tortured, castrated, killed. All in the name of ‘mental health,’ ” he wrote in March 1969. For more information visit www.cchrflorida.org