Historic Portland Oregon Bed and Breakfast earns top honor as one of America's most romantic B&Bs by Jetsetter.com which describes Portland's White House as having "top-notch service and idyllic atmosphere where ambiance is easy to come by." 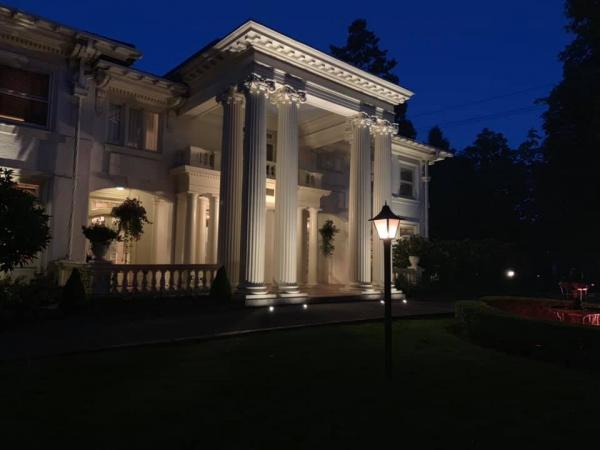 On the heels of receiving two major honors, AAA’s Four Diamond Award and the International Coverings Installation and Design (CID) Award, Portland’s White House has been named by Jetsetter.com as one of the seven most romantic bed and breakfasts in the nation. The imposing Greek Revival mansion, which was built for Oregon timber baron Robert Lytle in 1911, was recognized for its “top-notch service and idyllic atmosphere where ambiance is easy to come by.” The write up recognizes the “stately columns, hand-painted mural in the foyer, grand staircase, antique furnishings that look like they were transplanted from European manors and the flower-filled courtyard that plays host to visiting hummingbirds, which flit nearby as you sip your morning espresso.”

“Wow…we are incredibly honored to have been recognized among the thousands of bed & breakfasts nationwide by Jetsetter.com,” said Frank Groff, who, with his partner, David Krause, purchased Portland’s White House in 2018 then embarked on a $1 million renovation. “We’re glad that they not only praised the aesthetics, but the extraordinary service thanks to our incredible innkeepers, Carol and Brian Kelly, who are the heart and soul of Portland’s White House.”

Situated in the Irvington neighborhood, Portland’s White House holds a place of honor on the National Historic Registry. Lytle spared no expense on its construction. He made it virtually fireproof with metal lath and plaster and tile roofs then carefully installed the very finest materials, including mahogany accents, wood floors and tasteful stained glass windows crafted by the Povey Brothers, who were known as “The Tiffany of the Northwest.” The remodel of the Main and Carriage Houses, which together encompass 9 ensuite bedrooms, also included restoring the living room, game room, formal dining room, commercial kitchen, grand common areas and an 85-seat ballroom that is ideal for wedding receptions, corporate affairs, birthday celebrations, etc.

Medium.com – “The most romantic, upscale B&B in Portland and possibly the entire country”