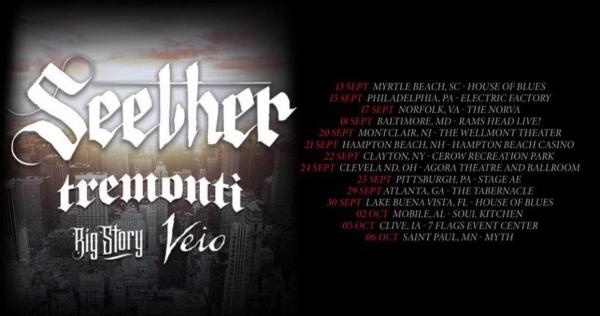 Veio, a progressive hard rock group based in Portland, Oregon, announced the official dates for their new East Coast tour with Seether and other bands. Beginning on September 13 in North Myrtle Beach, SC, the tour will bring the artists to more than 25 cities including Philadelphia, PA, Norfolk, VA, Baltimore, MD, Clayton, NY, Fort Wayne, IN, Clive, IA and many others.

*** Breaking News: Hurricane Florence has caused a cancellation of the North Myrtle Beach, SC concert. The concert scheduled for Norfolk, VA might also need to be cancelled due to the hurricane. ***

More information can be found at https://veiomusic.com.

Recently begun earlier this month, the tour will include concerts throughout the East Coast, with the last date scheduled for October 6 at the Myth Concert House in Minneapolis, MN.

Released on March 17, 2017, the ten-piece album has been widely acclaimed for its heavy sound, creative use of time signatures and original atmosphere.

According to Prog Sphere, “the freshly formed Veio lineup brings a complex, heavy sound, with notable time signature changes and vocal anthems that peak during choruses, but don’t fizz out. Their sound works to unite both prog rock fans and metal fans, alike, with their carefully crafted song structure, tone and master level of musicianship”.

The September – October 2018 tour dates are available on the band’s official website and on their Facebook page https://www.facebook.com/pg/Veiomusic. Venues include Electric Factory in Philadelphia, The NorVa in Norfolk, Agora Theater & Ballroom in Cleveland, and many others.

Veio is a progressive hard rock band based in Portland, Oregon. Ear to the Ground Music described the band’s sound as “[weaving] together the melodic side of acts like Tool with the genuine lyrics of Thrice while still fully embracing the post-rock attitude”.