Racers360, the world’s leader in motorsports driver coaching announced a complete rebrand to Blayze, as it scales into new sporting markets. As a first step in the rebranding, Blayze will also be launching its next two sports: Soccer & Basketball. 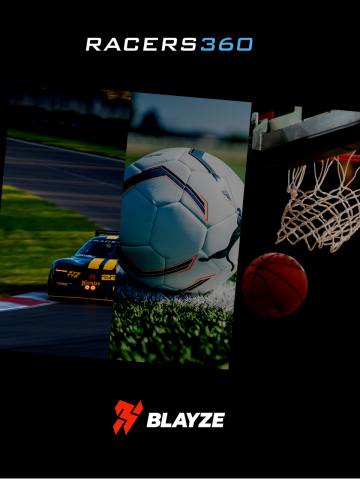 Racers360, the world’s leader in motorsports driver coaching announced a complete rebrand to Blayze, as it scales into new sporting markets. As a first step on the rebranding, Blayze will also be launching into its next two sports: Soccer & Basketball.

“We started Racers360 with an idea on how we could make it easier and cheaper for race car drivers to get faster by learning one-on-one with professional coaches, and to also help our coaches make more money at the same time,” said Dion von Moltke, Founder of Racers360 and Blayze.

“We had no clue how well it would work. But, after we have seen our coaches do thousands of coaching sessions for more than 700 racecar drivers. This also helped our coaches earn hundreds of thousands of dollars, and saved customers more than $2.5 million in coaching fees, it’s safe to say that this idea is working.”

Racers360 was launched in 2018 by co-founders Dion von Moltke and Chris Roberts, focused primarily on grassroots racers who were often frustrated with their on-track performance. Many of them ended up spending small fortunes on upgrades to their race cars in order to get faster on track.

It quickly became evident that Racers360’s one-on-one personalized virtual coaching services, delivered by professional race car drivers, was far more cost effective and also produced astonishing improvements in performance. Customer lap times dropped by an average of over 2 seconds, and in some cases by over 4 seconds per lap after just a single coaching session.

Racers360 started with Sportscar Racing and has since added Karting and Motorcycle Racing to the platform, producing similar results for those competitors globally.

The Racers360 team has built the world’s largest and most comprehensive free and paid resource library, all of which will now be available in Blayze. This includes an extensive compilation of Racetrack Guides, Webinars, Instruction Courses, Racecraft Tips, Driving Techniques and Racecar Performance Data.

Blayze coaches are the best in the world at viewing an athlete’s skill and distilling complex information on how to improve in a very simple, concise, and positive way for athletes of all skill levels to understand.

Customers can easily upload videos of themselves on any camera and send these directly to their chosen Blayze coach. The coach then analyzes their video and provides detailed recorded video instructions on how and where improvements should be made.

Customers are also able to view all of their coaching sessions over and over again, whenever and wherever they need to.

With the exceptionally popular Blayze+ monthly or annual subscription, customers have access to personalized coaching, custom training plans, chat messaging with their coach, monthly coach check-ins and a 20% discount on all coaching sessions.

More information on Blayze+ can be found here: https://blayze.io/blayze-plus

Blayze has been built on several powerful principles of optimal personalized sports coaching, inspired by the dramatic performance improvements that have been accomplished by drivers using the Racers360 coaching platform.

After many decades of one-size-fits-all group training and coaching used by team sports, research now indicates that this learning style is not particularly helpful to aspiring young athletes.

Using youth soccer coaching as an example: Most young players, even those eager to improve, suffer terribly from peer pressure and the fear of being embarrassed by what could very well be an unqualified coach yelling at them in front of their friends.

This creates the worst possible scenario for anyone trying to absorb information and improve their performance. Also, with group or team coaching, it’s virtually impossible for the coach to tailor their approach to the individual needs of each student.

How does an online coaching company stay away from this same one-size-fits-all model? Some industries are already using software in conjunction with humans to develop high-quality personalized feedback, and it’s proven to work far more effectively than traditional coaching.

Blayze has not only witnessed and recorded the impact that personalization has on learners firsthand but has also studied the science behind it. A fascinating study, called “Bloom’s 2 Sigma Problem”, showed that when learners had access to one-on-one coaching, they performed 2 standard deviations better than other participants.

This essentially means that when provided with a one-on-one coach, the average student outperformed 98% of all students who had engaged in standard group coaching.

As the article above describes, researcher Bloom observed that unfortunately one-on-one tutoring is “too costly for most societies to bear on a large scale”. That is precisely one of the key challenges Blayze solves, it breaks down the cost barrier, making one-on-one coaching affordable for most aspiring athletes.

Blayze will strive to continue delivering advances in coaching technology within their current focus areas: Motorsports, Soccer, Basketball, and Stand Up Paddling, and is also planning on forging a rapid expansion of the platform into other sports.

“At Blayze we are focused on starting the next wave of education and coaching with a foundation in personalization. We will do it in a way that promotes growth globally across most sports and possibly even beyond sports. If we can achieve that, then we will have positively impacted the lives of millions of people,” said von Moltke.