Founder of the LoveWorld Incorporation, Pastor Chris Oyakhilome, is reaching the end of his world-renowned Bible Tour across the Holy Land. Pastor Chris and his delegation traveled to Caesarea yesterday, where they visited the historic Christian and Jewish sites. 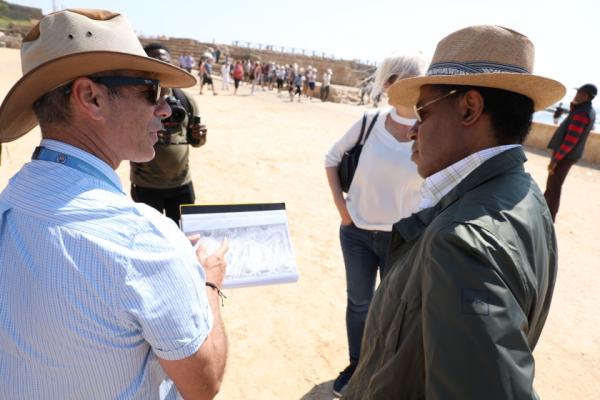 Founder of the LoveWorld Incorporation, Pastor Chris Oyakhilome, is reaching the end of his world-renowned Bible Tour across the Holy Land. It was important for the Pastor to be accompanied by followers of Christ Embassy (LoveWorld Incorporation), as it will lift their spirits and bring them closer to the earth Jesus has walked on. The Pastor chose a variety of places to visit, one being Jerusalem, where the Jewish people celebrate Jerusalem Day, signifying the reunification. Each destination has a religious and historic connotation that will bring the Christian and Jewish communities of Israel even closer, as they partake in this shared experience together.

Pastor Chris and his delegation traveled to Caesarea yesterday, where they visited the historic Christian and Jewish sites. The ruins are rich in history, and remain until today for people to visit and explore. The history behind Caesarea is ever so great, and it has been told that Philip the Apostle used to live in Caesarea, and it was where Paul was imprisoned. The delegation began on the ancient steps of the famous Amphitheatre of Ceasaria, where it has been stated Emperor Tiberious and Pontius Pilate had a connection to. It is in fact, the only archeological evidence of the Pilate’s existence. The delegation had the opportunity to take in the Mediterranean view and thanked God for this opportunity. Ceasaria is also the place where Pether baptized Cornelius, mentioned in Acts 10, and where it has been stated that Paul spent a lot of his time in.

The delegation then visited Caesarea’s Antiquities park, located right beside the amphitheater, which features remains of ancient Roman port city. The excavations and buildings from different periods represent the thousands of years of history and battles that occurred. They were given a brief speech on the history behind the area, which has been reported to have been very informative. Next to the ruins is a quaint restaurant, where the delegation shared a delicious meal.

During this time, the other Christ Embassy group in Jordan visited Petra, the historical and archeological city that is famous for its rock cut architecture. This also happens to be one of the most visited tourist attractions in Jordan, as it is one of the Seven Wonders of the World. According to some, Petra is Sela, mentioned in the Old Testament. They then enjoyed Camel rides and a lunch in Petra.

Tomorrow, Thursday the 17th of May, Pastor Chris Oyakhilome and Pastor Benny Hinn will be attending a charity gala in Olmaya Hall, situated on Jerusalem’s promenade, overlooking the beautiful hills of the city. Here, they will be holding a ministration for hundreds of people, which will be broadcasted live at 6PM (GMT+1) or 8PM Israel time. The broadcast will be available on the following YouTube and Facebook livestream links:

According to the organization, this official livestream was organized as a “perfect way to end up the eight-day Bible Tour across Israel and Jordan.”For more information, believers are encouraged to visit https://bit.ly/2I6BcRX and https://bit.ly/2rbI7UJ.