Overcome Real Estate Development Opposition and Get a Yes Vote

Katie Coates, author and consultant to real estate developers, helps her clients get approval for their development projects. Download a free pdf of “Yes Vote”- https://goo.gl/pXFPZW. 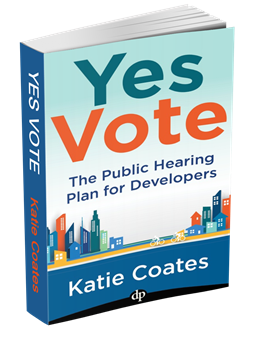 One of the biggest challenges real estate developers face is getting approval for their projects. An effective community support strategy will help to overcome opposition and position the project to get the necessary permits from decision makers. “

One of Katie’s clients came to her after his mixed-use infill project was defeated at the planning commission. The project had a housing element, office space and hotel rooms on a site that was properly zoned. He had listened to public input, modified the project with set-backs and agreed to host the city’s weekly farmer’s market.

But when the developer presented the project at the public hearing, angry, anti-project neighbors showed up in force. There were a few supporters at the meeting, too, but they were intimidated by the opponents. They didn’t sound confident because of the negative energy in the room. The planning commission told the developer that they needed more time to consider his project, and put his project on the agenda for reconsideration in six weeks’ time.

“My client left that hearing feeling like he had been used to sweep the floor. He had been working with another public relations consultant and he called me after the hearing to see what could be done to save the project. I told him this was clearly a case of needing to Fill the Hall,” says Katie Coates, author of ‘Yes Vote: The Public Hearing Plan for Developers.’ “We decided which messengers would be most persuasive and influential to the commissioners and found those supporters outside the neighborhood – business leaders and former political leaders, who signed support letters.”

Yes Vote outlines the finer points and the strategy and tactics needed to identify and enlist the help of supporters.

The process detailed in “Yes Vote: The Public Hearing Plan for Developers” works for those who are proposing or fighting a change in bylaws at their Homeowners Associations, or for parents wanting to effect change at their children’s school districts.

“The precepts I’ve created for real estate developers work for any kind of circumstance where advocacy, lobbying, and community involvement are crucial,” says Katie Coates, author.

Katie Coates, author, speaker and consultant, has worked with developers for more than 20 years and helps her real estate developer clients get approval at public hearings – at the city, regional, and state-agency levels. Katie Coates is available for consulting and keynote presentations.

Real estate developers can download a free pdf copy of the new book “Yes Vote: The Public Hearing Plan for Developers,” by Katie Coates, author, which is an Amazon bestseller in the United States and Japan. The e-book is listed at $9.99 and will be available in bookstores later this year at $16.99.