The famous 80s cover band FlashPants won the Gong Show Season Finale with a funny, high-energy rendition of A-Ha’s ‘Take on Me’. With 3+ million viewers the band got a perfect score of all 10s from judges Isla Fisher, Will Arnett and Courteney Cox 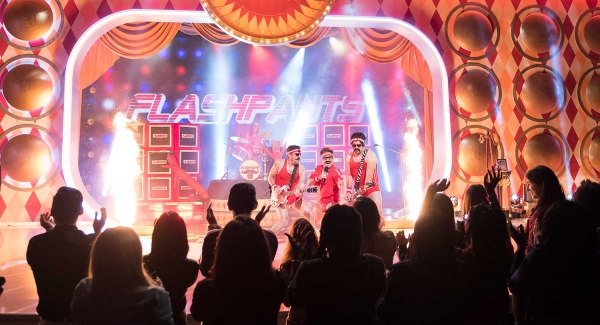 The popular Orange County 80s cover band FlashPants won the Gong Show Season Finale on ABC with a perfect score of all 10s by celebrity judges Isla Fisher, Will Arnett and Courteney Cox, in front of 3 million viewers.

More information is available at https://FlashPants.com.

FlashPants is a popular American 80s cover band and the most hired band in California, performing over 200 shows a year for the public, in addition to weddings, corporate events, private parties, festivals and fundraisers around the country. They have a reputation for getting their audience dancing and laughing all night long.

The famous 80s tribute cover band won the Gong Show Season Finale on ABC in front of 3 million viewers with a funny, high-energy rendition of A-Ha’s ‘Take on Me’ which got a perfect score of all 10s from the celebrity judges in attendance, Isla Fisher, Will Arnett and Courteney Cox. They impressed viewers, judges and host Mike Myers with the unique blend of 80s Vegas-style entertainment brought to the stage.

FlashPants is the highest rated band in America on Yelp, and voted ‘Best Live Band’ multiple years in a row for the O.C. Weekly’s Readers Poll. They’ve also headlined the same venues as original 80s acts like Berlin, Bow-wow and Dramarama.

One of their most recent fans, Stacy from Chino Hills, explains that “FlashPants played for my husband’s 50th birthday and wow, they blew everyone’s mind. They filled out our main ballroom with lights, air-men, fog machines, amplifiers and many other fun props. We danced all night long. The younger people loved it and so did my 78 year old mother. My husband even crowd surfed, and he’s never done that before. We are still talking about that night!”

The FlashPants website includes a calendar of shows for the year, multiple videos showcasing the funny, unique and high-energy 80s act that won over both the Gong Show judges and the crowds parties, weddings and corporate events they play around the country. Quotes and private bookings with FlashPants are available at 626-386-3861 or through the website link provided above.