Aiming to give LGBT supporters a way to show their appreciation for the title 'God Is Gay', a scriptural analysis of God's word for homosexual reference, New York-based Goodfriend Publishing has released a durable and stylish limited edition 'God Is Gay' mug. 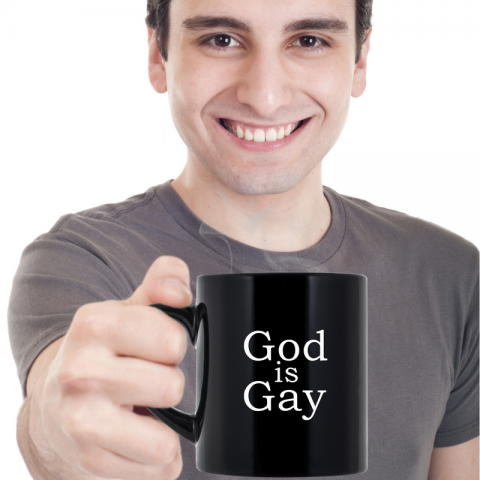 New York-based, Goodfriend Publishing, publisher of the ‘God Is Gay’ book, has announced that its God Is Gay Christianity crazy mug is now on-trend. Flying off the shelves faster than the movement of a Hummingbird’s wings, this mug is a favorite ‘must have’ for the home, office, and workshop.

More information is available at https://gearbubble.com/godisgay.

Recently released, the God is Gay Christianity crazy mug is a 15oz, dishwasher and microwave safe ceramic product that comes in black. Printed and shipped from the US, the mug has the words ‘God Is Gay’ stenciled on the front in white lettering, which makes for a great conversation starter.

Amplifying the God Is Gay message, this mug makes a statement about an individual’s stance on gay Christianity and their support for the LGBT movement and equality. Affordable and simply elegant, this mug is ideal for anyone believing any Bible suggesting homosexuality is a sin is misinterpreted.

All God Is Gay mugs ship within 5-8 business days, with a 100% satisfaction guarantee. So, any purchaser who doesn’t absolutely love their mug can contact the shipper and they’ll rectify the issue.

The ‘God Is Gay’ title, analyses biblical scriptures dating back to 1599 for homosexual reference. The title then draws a comparison between historical ‘Old Testaments’ and ‘New Testaments’ to see how the original text has been modified to include homosexual references so being gay is regarded as a sin. As such, the title God Is Gay provides evidence that God loves all regardless of their sexual preference.

One purchaser of the God Is Gay mug said, “Christmas is over so put away our ugly sweaters and get out your crazy mugs that you’ve acquired over the holidays. You know the ones about your dog, cat, grandpa, and mom. But, if you don’t have a gay Christianity mug, which is currently on-trend, then it’s time to get one.”

To find out more about God is Gay, Christian faith and the on-trend mug, visit http://godisgay.com or https://facebook.com/godisgay.thebook and the link above.