As work progresses on the restoration of a 1929 For Tri-Motor aircraft, Port Clinton, Ohio-based Tri-Motor Heritage Foundation (419-635-6383) launches a new fundraising drive to push the project towards completion. 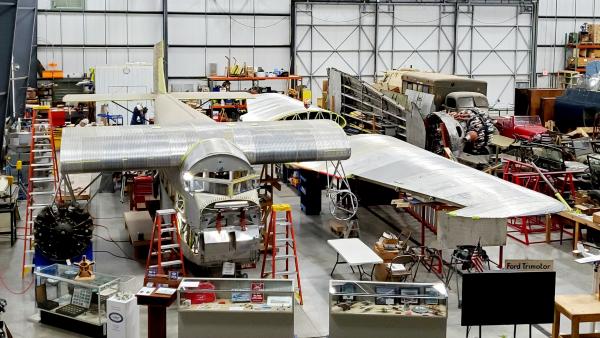 Model 5-AT-40 was built in 1929, and restoration on the historic airplane has been underway at Port Clinton’s Liberty Aviation Museum for over 10 years. While recent progress has been significant, the foundation states that it still needs support from the general community in order to return the Tri-Motor to a flying condition.

More details can be found at: https://www.restoretheford.org

The Liberty Aviation Museum already hosts one flying example of the Ford Tri-Motor, which played an important role in the birth of commercial passenger aviation. Through renewed interest and support over the next 12 months, the Tri-Motor Heritage Foundation hopes to provide further opportunities for the public to learn about this piece of aviation history.

Flown by Island Airlines, Ford Tri-Motors serviced remote communities on the Lake Erie Islands from 1946 until the 1980s. In over 5 decades of operation, the aircraft spawned a range of commercial aviation roles that are central to the modern USA economy, including passenger transport, medical services, mail transport, and air cargo.

Long replaced by more advanced aircraft, the Tri-Motors and the role they played have largely been forgotten. A team of dedicated volunteers, formed by local private pilot Ken Benjamin, set about the current restoration project in 2004. In the intervening years, substantial progress has been made on elements of the fuselage and wings, which can now be viewed in a hangar at the Liberty Aviation Museum.

While some sections are well advanced, the foundation states that much work remains in order to return the aircraft to the skies. Along with funding, the foundation is also seeking donations of critical elements like engines, seats, landing gear strut assemblies, oil coolers, and radio equipment.

Registered as a non-profit 501(c)3 charitable organization, the Tri-Motor Heritage Foundation was formed with the sole aim of preserving a piece of American aviation history. In addition to providing an opportunity for enthusiasts to experience a flight in one of these historic aircraft, the foundation also aims to educate the public on the unique and colorful story that they played a leading role in.