Expert Sports Podiatrist Mark Lin from Footwork Podiatry, Sydney NSW, says it’s not just the pro athletes that are supported by various sports medicine specialists these days. Find out why. 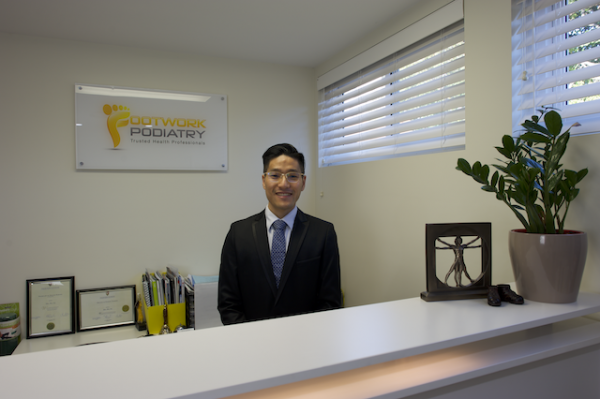 Why Growing Numbers of Ordinary People are Seeing Sports Podiatrists

High impact exercise of any kind can easily lead to injuries, and since feet are on the receiving end, it comes as no surprise that feet and ankles are first in the firing line and that Sports Podiatrists are in demand. Shin splints, or medial tibial stress syndrome, also has its origin in the feet. Sprained ankles put athletes out of action for weeks at a time, and foot pain is enough to keep most players who experience it off the track or field for some rest and recuperation.

Flatfeet and poor ankle flexibility footwear that doesn’t provide adequate support, incorrect gait, and inadequate warmup and cool-down are among the factors that contribute to most lower-limb sports injuries says Lin.

However, as he points out, the primary focus of sports medicine is the prevention of injuries. “Sports test your body, so if you have any existing weaknesses, they will come to the fore,” he explains. “If we work together to correct the cause of an injury, you’re stronger than ever, and your performance improves accordingly. There are lifelong benefits.”

“Of course, we do help our patients to recover from existing injuries but treating the symptoms without addressing the cause means it’s only a matter of time before the athlete suffers from the same injury again, or even suffer from other pain and injures down the track.”

It’s a well-known fact that most professional teams have a network of sports health professionals working with the team and its coach. But Lin says that public awareness is growing, and he’s seeing more casual athletes visiting his Northern Sydney and Sydney CBD practices than before.

“Doctors have always known that sports podiatry can be helpful, but now we’re seeing more members of the public who aren’t in the big-name teams and who aren’t being referred,” he says.

“They already know a Sports Podiatrist can help them solve their problems, and they’re coming directly to us. The most encouraging thing is that were not just dealing with quick fixes. We’re looking at the lifetime health of the lower limbs.”

Despite this, Lin says there are still misconceptions. Some people blame the sport for their problems and simply stop making demands on their bodies instead of working to strengthen themselves to perform even better. There are times when health conditions can make sports participation unwise, says Lin, but in most instances, treating the underlying causes of sports injuries prevents their recurrence.

At the same time, attending to issues that become apparent through sports podiatry improves daily quality of life. A lot of people with, for example, flatfeet, foot arthritis, heel spurs, or gait problems experience low-level symptoms that are irritating, but not painful enough to prompt them to seek medical attention.

Lin says that quite often, symptoms only appear towards the later stage of a problem. In most cases, some degree of irreversible damage has likely occurred by the time pain is experienced. “Pain is a sign your body has already compensated enough for a problem and is trying to tell you to do something about it, so don’t ignore the symptoms from your feet and legs.”

Common symptoms such as morning foot stiffness, general foot aches, calf tightness or tightness under the arch often get overlooked as they do not normally prevent people from doing anything. However, Lin warns that more extensive damage often starts from these symptoms.

Lin says, “Growing pain” in children should be considered in the same way. Children may grow out of their foot pain as they age but there may be lifelong or future problems as their growing bones and muscles adapt to an inefficient way of functioning.

Pain is a gift which signals there is something wrong with the body. “It’s like the warning lights in your car, they flash for a while before it breaks down.” So, stop ignoring pain, listen to your body and get your feet assessed even if you’re only experiencing minor symptoms. “There is always something that can be done to optimise your foot function and prevent future problems,” Lin concludes.

With the help of a Sports Podiatrist, the aches, pains, and fatigue people experience on a regular day are lessened.

Mark Lin is a leading Sports Podiatrist in Sydney. Footwork Podiatry has two convenient locations Roseville on Sydney’s North Shore and Sydney CBD. Both offer the full spectrum of podiatry treatments and although they receive referrals from medical doctors, they are willing to assess and assist anyone who suffers from lower-limb issues.

For further information, visit the Sports and Podiatrist Clinic to book online, or call Mark Lin and his friendly team on +61 2 9416 7889.