AUSTIN, Texas - The EarthLight Foundation, New Worlds Institute, and The Foundation for the Future announced New Worlds 2022, and the Space Cowboy Ball will be held Oct. 28-29 at the AT&T Conference Center in the heart of the University of Texas in Austin. 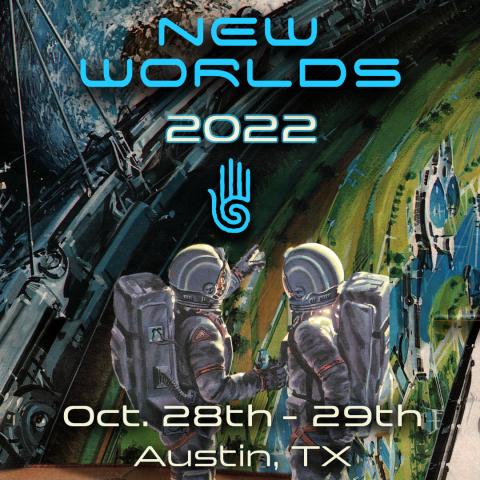 After a two-year hiatus, the fifth edition of New Worlds is back and better than ever. New Worlds is building on its reputation as the “best little space conference in the world” with a five-star lineup of award-winning writers, speakers, and entertainers, ranging from astronauts to artists, engineers to entrepreneurs, & educators to experts on topics including space law and policy to agriculture.

“New Worlds is both an event and a gathering,” said EarthLight Founder Rick Tumlinson. “We curate an environment where space professionals can learn of ideas and projects outside their normal flow of information. We also encourage the challenging of old ideas and traditions, and we throw open the airlock of the space community to new players – while creating a “space” where unexpected synergies can occur.”

The event features top space experts such as Lori Garver, whose book “Defying Gravity” tells her story of fighting the SLS rocket (now on the pad in Florida) to enable private companies like SpaceX to take over ferrying astronauts to space. Others include Dr. Chris Boshuizen, Blue Origin astronaut and co-founder of Planet Labs, whose imagery of the war in Ukraine is featured on the news; Former State Dept. Director of Space Commerce Kevin O’Connell; Prof. Michelle Hanlon talks about treating the Moon and Solar System with the respect they deserve. Dan Faber of OrbitFab joins other space entrepreneurs to explain his plans for space gas stations. Former Blue Origin Chief Legal Counsel Sagi Kfir will focus on property rights on the Frontier.

Tim Chrisman of New Worlds’ partner Foundation for the Future sums up New Worlds this way: “There are space conferences, science fiction cons, and then there’s New Worlds, where facts meet fiction, and the fire of imagination ignites the power of inspiration to lift us all into a grand new tomorrow – even as we have a great time!”

While focused on reality, this year’s conference includes award-winning science fiction authors like Orson Scott Card, creator of the legendary “Ender’s Game.” Daniel Suarez, whose book “Damien” made the NY Times best-seller list and whose recent books create powerful reality-based stories of life and work on the High Frontier, will also be speaking and signing copies of his most recent book “Delta V.”

With two full days of presentations, interviews, and discussions by leading space players and experts, New Worlds will fill the minds and imaginations of all who attend.

Notes on the Space Cowboy Ball:

In the middle of New Worlds is the Space Cowboy Ball, the must-attend masquerade party and awards ceremony, asks: “What would you wear to a party on Mars in 100 years?” With past guests including Jeff Bezos, Robert Rodriquez, and cast members of the Expanse, the Ball is a space education benefit event. It has been called part black-tie, part Burning Man, and part Mardi Gras – with space suits.

The Ball features awards for the best presentation of space in Hollywood and literature and recognizes a top space educator and inspirer with its “Permission to Dream Award.” Nashville and Austin musicians David Pulkingham and Emily Grace Clark will perform in the first part of the evening, followed by a dance party that will raise the roof with the beats of DJ Chrispy and other top spinmeisters. While Space Cowboy headline award winners in the past include Jeff Bezos and Buzz Aldrin, for now, this year’s winner is under wraps…

Namrata Goswami, one of the US’ top experts on the Chinese space program, will explain how the Belt and Road initiative extends to Moon boots and space bases. She will show how the Chinese government is pouring billions into building space solar power systems and is moving to control the Moon’s lunar ice deposits – the equivalent of owning Earth’s oil fields. Her partner, Col. Pete Garretson, will discuss our strategic challenges as the US commercial space sector enters places no one has gone before.

Once tapped to be NASA’s CFO, Thunderbird Prof. Greg Autry will focus on the harsh realities of starting a new business on space or Earth. Meanwhile, the “Sharks in Space” business plan contest will demonstrate the truth of his words as four entrepreneurs lay it all on the line in a live high-pressure pitch contest in front of expert judges – and an audience that gets to vote as well!

Dr. Lamont Colucci, chief of Space Force Doctrine and planning, will share why America and the world need this new military branch. Col. Bill Bruner from Lawrence Livermore National Laboratories, and CEO of Frontier Aerospace, will explain why it makes no sense for us to be using old Cold War missile tech to fly people and payloads into orbit.

Mark Russell’s HyperScience, is blasting hyper-speed projectiles down into the Earth for companies like Shell Oil, with plans to turn those tubes upwards and fire payloads into orbit without rockets. On the green side, Bart Womack, CEO of Eden Grow Systems, will present and demonstrate their aeroponic grow towers capable of feeding an entire family on Earth or Mars. CEO of Elevated Materials, Daniel Olliges, will reveal how his LA-based company’s work turns rocket scraps from SpaceX into skateboards and other products – saving landfills from tons of long-term waste.

Kim Macharia, inclusion advocate and Executive Director of the Space Prize, will give her story and offer insights into opening the space industry to new minds and players. Mark Wagner, the organization’s President, will unveil his ideas for enrolling our next generation to open Solar System. Inara Tabir from Gaays in Space will explain why the Frontier offers a new place for a united human race to come out of the airlock and celebrate a being human is about being yourself.

New Worlds has it all. Register here.

(New Worlds and the Space Cowboy Ball offer a steep early bird discount for tickets purchased before Sept. 15, so order yours now! Use code PR for a further 10% off this week!)