A new Political Fiction book has been released by David Paul Taylor. The author has consulted for government committees and has wrote a political allegory based on his research and experience. 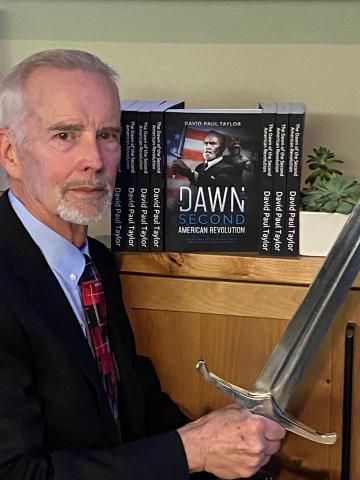 David Paul Taylor is pleased to announce the release of his new book, titled The Dawn of the Second American Revolution. The book is a political allegory that explains the battles and the enemies that citizens must fight to end corruption in the U.S political system.

The events leading to the Second American Revolution are told from the perspective of the main character, Winston Roark. The book explains Roark’s revelation of the problems, and the evolution of his strategy to overthrow the corrupt political aristocracy and implement a citizen-directed democracy that puts citizens in charge of the government.

David used his skill and expertise as an Information Technology (IT) enterprise architect to design the solution presented in the book. David’s solution synthesizes the skills of a modern-day IT architect and the teachings of the ancient Chinese general, Sun Tzu, as written in The Art of War. The book embodies one of Master Sun’s lesson in particular: “To fight and conquer in all your battles is not supreme excellence; supreme excellence consists in breaking the enemy’s resistance without fighting.”

David’s interest in fixing the U.S political system resulted from his realization that all politicians, democrats, republicans and independents, serve special interests, not citizens. David came to this realization after deficit spending by the current republican administration matched, or exceeded, the deficit spending of prior democrat administrations. Republicans, who previously voiced grave concern over deficit spending, were now silent. Why? Because the reality of deficits is they benefit special interests on both sides of the aisle.

The book was the culmination of thirty-six months of research, observation, writing, and editing. The book reinforces one constant in overthrowing the political aristocracy: when citizens unite, they can conquer our political enemies without fighting. Despite being a first time author, The Dawn of the Second American Revolution has been awarded one of the best books by a new author in 2020 according to Dabb Media.

“The author has written a novel that is timely, offers a relevant and realistic topic, and has the necessary components of a bestseller, including a story that draws the reader in, a believable set of characters, a climax, and a solid ending.”

David served as a consultant to US Senate Appropriations Subcommittees. In that capacity, he performed an analysis of the capabilities delivered by IT contractors versus the appropriated expenditure plans approved by the Treasury Department and Department of Justice. David also reviewed Agency response plans addressing Inspector General (IG) and Government Accountability Office (GAO) audit findings. David provided recommendations to appropriations language that tied funding allocation to actual project performance to ensure the taxpayers received the greatest benefit for their tax dollars.

The Dawn of the Second American Revolution can be found on Amazon in both Kindle and Paperback editions.