New and Improved App Pays You for Your location Data and Gaming Activity!

It's Your Data, You Should Get Paid for it! Just set it and forget it! 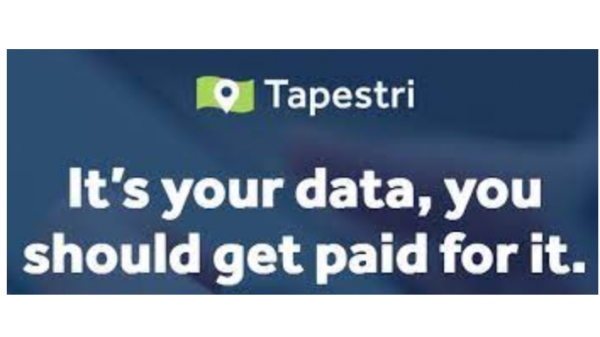 Get the new and improved Tapestri App and be paid for using one’s phone.

Along with payment for access to location data, money can be now be earned by doing surveys, gaming and referring others to use the app.

The idea for creating a payment earning application for anonymous location data came about because transactions were already happening through everyone’s phone with their data that they are not aware of nor being paid or compensated. Now with the Tapestri app people will be paid for much of what they do with their smart phones.

Shouldn’t this be how life works? Well it is with the Tapestri app.

Tapestri Inc. got it’s start when it was noticed that a growing trend of companies were taking people’s data and reselling it without compensating them. After considering the concept for several years, Tapestri was officially founded in 2021 by data pro and serial entrepreneur Walter Harrison and has been continuously evolving. The issue was simple: consumers unknowingly give away data but are excluded from the financial benefits reaped by a billion-dollar+ industry that a few large tech companies dominate. What’s more, as Harrison watched industry and government measures begin to affect the collection and use of data, he decided the timing was right to launch an easy-to-use app that pays consumers for their data. As the Tapestri vision began to take shape, a founding team of data veterans assembled to design, build, and launch the app and create a fully consented consumer data marketplace where everyone wins.

Try the Tapestri app today; after all, “It’s your data. You should get paid for it!”