National Association of Nonprofit Organizations & Executives' Board of Directors has named Susan J. Radford as the 2021 recipient of the Charlotte Berry Best Practice Philanthropist Medallion. 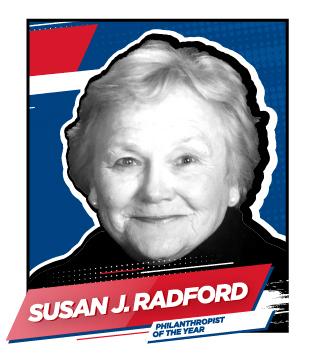 Washington D.C. – February 11, 2021 – After a thorough and significant review of several nominated donors and family foundations, National Association of Nonprofit Organizations & Executives’ Board of Directors has named Susan J. Radford as the 2021 recipient of the Charlotte Berry Best Practice Philanthropist Medallion. This commendation is not bestowed based on to whom a person gives, nor the number of gifts made, or even the generous amounts shared, but rather it is awarded because of the “WAY” a person gives when they invest in a charity. In the tradition of Charlotte Berry, Susan Radford’s record of underwriting administrative infrastructures that foster enterprise growth is unparalleled among NANOE’s membership. Susan’s philanthropy and service, combined with her commit to NANOE’s mission to “transform the charitable sector” truly makes her NANOE’s 2021 Best Practice Philanthropist of the Year.

When asked about this honor Susan replied, “It is humbling to even be considered for the Charlotte Berry Philanthropist Medallion. I always knew that when I retired I would move back home to Brooks County. I am so thankful I did and became involved in my church and my community. It has been such a privilege to financially invest in local projects, particularly Boys and Girls Club of Brooks County, who focuses on our young people and their future.”

Today, Boys & Girls Club of Brooks County shared, “Congratulations to our Board Member Susan Radford she certainly continues to be the spark that gets us going! We are so thankful for her!”

The Charlotte Berry Best Practice Philanthropist Medallion is given in honor of “America’s Volunteer”, Charlotte Lunsford Berry. Charlotte, now 90 years old, has spent a lifetime championing the displaced, disenfranchised and disaffected. She’s has traveled the world as the National Chairwoman of Volunteers of the American Red Cross, supervising and planning activities for 1.8 million volunteers. She is also the founding chairwoman of the Red Cross National Museum Committee.

To put it plainly, like Charlotte Berry, Susan Radford has touched thousands of lives on her journey of philanthropy and volunteerism.

National Association of Nonprofit Organizations & Executives (NANOE) is a nationwide network of donors, volunteers and charitable leaders whose relentless commitment to significant and sustainable impact transforms the communities we serve. NANOE members are innovators who solve problems (not just service them) by deploying heroic missions of scale that confront social and environmental dilemmas so completely that money chases after their every need.