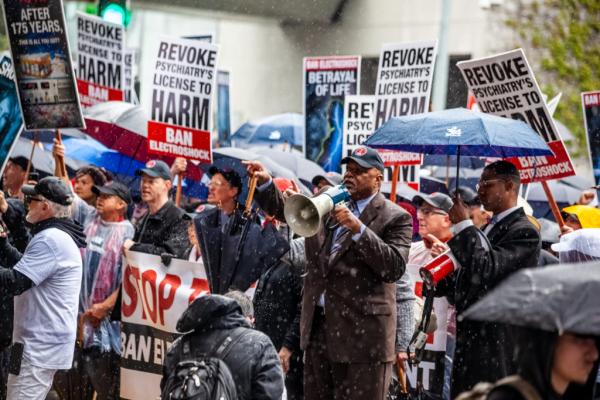 Rev. Frederick Shaw, Executive Director of NAACP’s Inglewood-South Bay branch, announced a campaign to educate African Americans about the long history of their betrayal and other minorities in the psychiatric system. He warns that mental health care today comes from an industry that is steeped in eugenics and once defined Blacks as suffering from a form of leprosy causing the color of their skin and requiring segregation. Shaw stated, “We must fight for protections against damaging psychiatric treatment offered for the very real pain that racism and injustice brings and abolish the stereotypical labeling of this as a mental ‘disease.’”

From using a “medical model” to justify whipping slaves as therapeutic, to delivering electroshock to Blacks without anesthetic and the psychotropic drugging of African Americans today, race-based mental health still exists, he adds.

Rev. Shaw is also a spokesperson for the Citizens Commission on Human Rights International (CCHR), a 51-year mental health watchdog, whose documentary on psychiatric racism is an important commentary. Shaw and CCHR’s international president, Jan Eastgate, attended South Africa’s Truth & Reconciliation Commission inquiry into apartheid crimes in 1997 to present evidence of psychiatry and psychology’s use of ‘scientific’ racism and eugenics to maintain apartheid. CCHR had discovered hidden psychiatric camps, where 10,000 Blacks were drugged, electroshocked, used for slave labor and often allowed to die from easily treatable medical illness.

The World Health Organization confirmed the abuse, condemning the camps in 1983, stating, “in no other medical field in South Africa is the contempt of the person, cultivated by racism, more concisely portrayed than in psychiatry.”[1]

“This cultivation is not limited to South Africa but is systemic throughout America, even today,” Shaw stated. A 2017 article in The American Journal of Psychiatry admitted: “In America, the Abolitionist and Civil Rights movements were met with mistrust and prejudice by mental health practitioners. African Americans, angry about their oppression, were labeled ‘schizophrenic,’ due to their supposed ‘pathological’ reaction of emotional disharmony, hostility, and aggression. The over-diagnosis of schizophrenia among African Americans persists today….”[2]

Shaw advises: “We have had centuries of psychiatric racism. We don’t want equal access to psychiatrists’ ‘standard’ of care, because the treatments offered are often mind-altering and harmful, can cause sexual dysfunction, birth defects, suicide and violence. It’s selling us into modern-day eugenics and mental slavery,” Shaw says.

· “Whipping the devil out” of slaves was considered a medical cure for idle Blacks to force them to “take active exercise” that vitalized blood to their brain “to give liberty to the mind.”[3]

· In the 1950s, U.S. psychiatrist Walter Freeman lobotomized Black patients at West Virginia state hospital. He considered these successful when “a week or so after operating upon 20 very dangerous” African Americans, he “found 15 of them sitting under the trees with only one guard in sight,” he wrote.[4]

· Psychosurgery was performed on Black children as young as five to control “hyperactive” and “aggressive” behavior. Their brains were implanted with electrodes that were heated up to melt areas of the brain that regulate emotion and intellect.[5]

· In New Orleans, Black prisoners were used for psychosurgery experiments because they were considered “cheap experimental animals,” as stated by one of the psychiatrists involved, Dr. Harry Bailey.[6]

· At the National Institute of Mental Health (NIMH) Addiction Research Center in Kentucky, drug-addicted African Americans were given LSD, keeping some hallucinating for 77 consecutive days.[7] Healthy African American men were also used as guinea pigs for the chemical, BZ, which was 100 times more powerful than LSD.[8]

· In the 1970s, NIMH Director, psychiatrist Frederick Goodwin, compared Black youth to “hyperaggressive” and “hypersexual” monkeys in a jungle.[9] NIMH developed a “Violence Initiative” program to look for a “violent” gene in African Americans and Hispanics that could be controlled by psychiatric drugs, including the antidepressant Prozac—known to cause violent and suicidal behavior.[10]

· Today, there is an over-representation of antipsychotic drugs prescribed African Americans.[12] Antipsychotics cause severe adverse effects such as tardive dyskinesia (uncontrollable movement disorder) and akathisia, an inability to keep still, causing extreme restlessness, leading to violent behavior.[13] African American men are most likely to receive excessive doses of these drugs.[14]

Says Shaw, “People need proper and effective healthcare, not damaging drugs and electroshock that passes for mental health treatment today. Martin Luther King told us that ‘Our lives begin to end the day we become silent about things that matter.’ I will never remain silent about the psychiatric abuse that African Americans have been and are still subjected to. Funds should be redirected from psychiatry into safe, accountable non-psychiatric medical care and social programs.”